Kara Zor-El is Superman's cousin. Albeit she looks like a teenager she is older than Kal-El. Superman's rocket ship traveled through a wormhole which brought him faster to Earth. Kara and her parents were visiting Kandor when Brainiac stole and shrank the city, kidnapping hundreds of thousands of Kryptonians, including Kara's best friend Thara and her father Ak-Var. Her family managed to get out of the city just in time, but fearing for Brainiac's hypotetical return, Zor and Alura sent their daughter to Earth. Since her arrival Kara was promptly welcome in the Kent Family and got along with Lois Lane. Kara's more hot-headed and more pro-active than her cousin because she remembers what being a helpless victim is like. Now she has powers and she can't stand to see helpless and defenseless people getting hurt by others.

One day Superman comes upon and defeats a Brainiac's drone and takes it to the Fortress of Solitude. Upon seeing it, Supergirl tells her cousin the whole tale of the thief of Kandor. Superman becomes determined to find Brainiac and retrieve Kandor. Before leaving, he entrusts Earth's protection to his cousin.

Some while later Brainiac's ship arrive in Earth. Initially, Supergirl is so frightened that she considers to talk her cousin into running away, but Superman reassures her, pointing out that Brainiac will never let up, but they have a chance to fight back on Earth.

Supergirl fights hard Brainiac's androids across Metropolis. During the battle, Supergirl and Superman invade Brainiac's ship, but in retaliation the Coluan fires a Solar Aggressor missile to destroy the Sun and Earth along with it. As Superman battles Brainiac, Supergirl chases the missile and manages to destroy it.

Under optimal conditions, this is the main source of Supergirl's super powers as they are contingent upon exposure to solar radiation from a yellow sun star system. Her biological make up includes a number of organs which lack analogues in humans and whose functions are unknown. It is believed that between one or more of these and her bio-cellular matrix, "yellow" solar energy is stored for later use. This allows for the use of these powers to fade when yellow solar radiation is not available instead of immediate failure.

Supergirl can, as a conscious act, fire beams of intense heat at a target by looking at it. She can vary the heat and area affected.

Supergirl's hearing is sensitive enough to hear any sound at any volume or pitch. With skill and concentration, she can block out ambient sounds to focus on a specific source or frequency.

well as allowing vast control over selective perception and focus.
This umbrella ability includes the following:

into most of the electromagnetic spectrum. She can see and identify radio and television signals as well as all other broadcast or transmitted frequencies. Using this ability, she can avoid detection by radar or satellite monitoring methods. This also allows her to see the aura generated by living thing.

This is the ability to see something at a great distance, without violating the laws of physics. Though limited, the exact extent of the ability is undetermined. In function, it is similar to the zoom lens on a camera.

This is the ability to see through any volume of matter except lead. Supergirl's can see things behind a solid, opaque object as if it were not there. She can focus this ability to "peel back" layers of an object, allowing hidden image or inner workings to be observed. The exact type of energy perceived - such as x-rays, cosmic rays, or some other energy invisible to normal humans - is unclear. This ability perceives an ambient energy source though, it does not involve the eye projecting a concentrated, possibly toxic, beam to be reflected back from objects.

Supergirl is able to manipulate graviton particles to defy the forces of gravity and achieve flight. This ranges from hovering to moving in any posture, in any direction.

Due to the interaction of her dense molecular structure and supercharged bio-electric aura, Supergirl is nigh-invulnerable to extreme energy forces. In addition, her extends this protection against toxins and diseases.

Supergirl is able to maintain continuous strenuous physical action for an indefinite period of time. This based on her body converting yellow solar radiation directly to energy, but is limited by physiological and psychological needs to eat, drink, and sleep.

Supergirl's strength is augmented by yellow solar radiation interacting with the greater than human density, resilience and biological efficiency of her musculature. Her strength is more an act of conscious will on energy fields than actual physical strength. It is this act of conscious will that enables her to perform physical feats that are beyond the mere application force, such as moving a mountain top without said rock crumbling under its own mass.

Supergirl is able to move at incredible speed by sheer force of will. This extends to her perceptions and allows for feats such as catching bullets in mid flight as well as covering vast distances in little or no time.
This also confers:

Supergirl is able to create hurricane force winds by exhaling air from her lungs. She can chill the air as it leaves her lungs to freeze targets. She can also reverse the process to pull large volumes of air or vapor into her lungs.

Under the effects of a "yellow" sun, Supergirl possesses the same potential weaknesses as an average Kryptonian. These include: 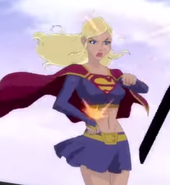 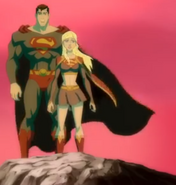 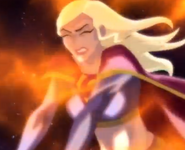 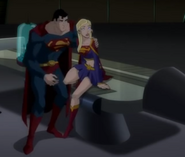 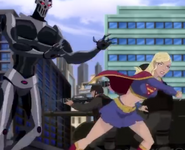 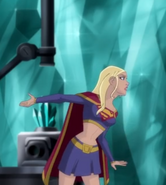 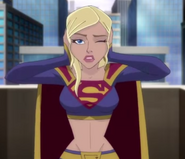 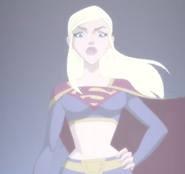 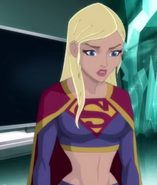 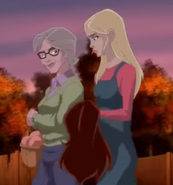 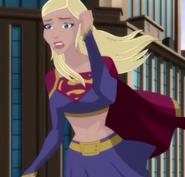 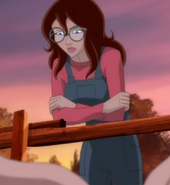 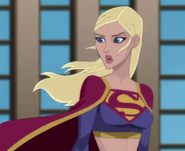 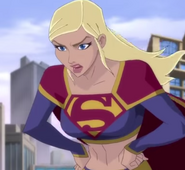 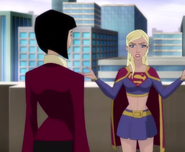 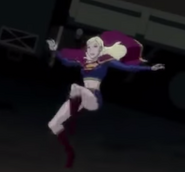 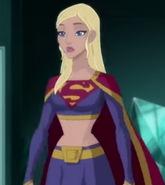 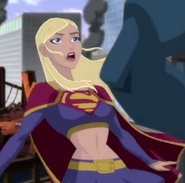 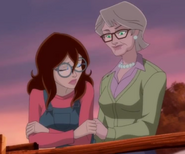 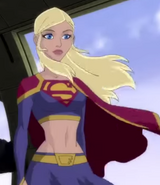 Add a photo to this gallery
Retrieved from "https://xianb.fandom.com/wiki/Kara_Zor-El(Supergirl)_(Superman:_Unbound)?oldid=289422"
Community content is available under CC-BY-SA unless otherwise noted.