Branch of Sin: Fists of Blood
She is a Deadman.

Before her time in the Deadman Wonderland, she worked as a nurse.

Once in DW, she was feared as the merciless Game Fowl, who won some Carnival Corpses.

It was at that time that Nagi approached her and told her that she was his friend, talking about the pretty sound of her bell. Together with Nagi, she later formed Scar Chain. In the anime, Scar Chain was already founded and Nagi appointed her as his second-in-command.

He once showed her his locket with, he says, a picture of his baby inside. However, the locket was empty, but Karako pretended she didn't see that it was empty and said to him that his daughter looks a lot like him.

Branch of Sin: Karako is a Deadman so she can freely control her blood out of her body.

Branch of Sin: Fists of Blood (血の拳, Chi no Kobushi): Karako uses her blood to cover mainly her fists and feet, but also her entire body, for additional defense and power. She can also gather more blood than usual, to create a rock-like formation around her hand, therefore, doing more damage than a "normal" cover. Also, she can use her Branch of Sin to seal wounds as displayed when she was stabbed by Genkaku.

Toto Sakigami, who acquires Fists of Blood using his Branch of Sin, Love☆Labyrinth, has shown the ability to reconnect severed arm and leg by creating a layer of blood to hold the severed limbs to his body. He remains in complete control of the limbs once they are connected, as well as stopping the bleeding from the injuries. 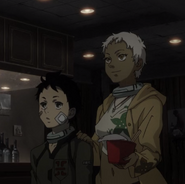