Karin Kurosaki is the fraternal twin sister of Yuzu, daughter of Isshin Kurosaki and younger sister of Ichigo.

Spiritual Power: Toshiro Hitsugaya mentions that Karin has high spiritual power for a Human, as she is able to see him. After Ichigo lost his powers, Karin's powers have gotten stronger and she now has hi spec spiritual medium disposition.

Enhanced Strength: As demonstrated, her kicks were strong enough to hurt weak Hollows.

Keen Aim: Karin is also talented at soccer which would strengthen her physical power. She defeats weak Hollows by kicking a soccer ball at them, which she calls her "Karin-Style Annihilation Shoot". 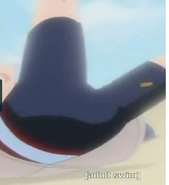