Eventually, Shunsui deduces they are simply stalling for time instead of fighting seriously. However, they prove successful regardless as Muramasa uses Ichigo Kurosaki's power to break through Yamamoto's barrier and take control of Ryūjin Jakka. With his plan having come to fruition, Muramasa reveals he merely used the other Zanpakutō spirits in his goal to take control of Yamamoto's Zanpakutō spirit. Angered by this, Katen Kyōkotsu and Sōgyo no Kotowari attack Muramasa, only to be incapacitated by Ryūjin Jakka's flames.

Later, Mayuri Kurotsuchi restores Katen Kyōkotsu to normal, but they are still able to freely manifest themselves whenever they wish. The taller woman spends her time playing card games with Shunsui, repeatedly beating him and forcing him to perform humiliating penalties. Upon hearing Shunsui wish for the Zanpakutō spirits to permanently return to their swords, she angrily pinches his cheek.

During this time, the 8th Division is assigned to help in catching and defeating the Tōjū. Instead of doing any work, the taller part of Katen Kyōkotsu suggests Nanao Ise should work together with the masked girl because she has nothing better to do. While walking, Nanao tries to get the girl's attention, but she attacks Nanao for touching her shoulder. Upon sensing a Tōjū, the masked girl finds and fights it, but toys with it instead of fighting seriously. Seeing this, Nanao interrupts the fight, which gives the Tōjū a chance to escape. As Nanao proves unable to get the girl to open up to her, Rangiku Matsumoto decides to help in trying to communicate with her.

Rangiku gets the masked girl to try on new outfits, introduces her to some guys, and gives her sweets and chocolates, but she shows no interest in anything. Later, Nanao notices that she likes flowers, and decides to have a party under the budding cherry tree. During the party, the masked girl walks away, and Nanao finds her staring at the near-barren plum tree. When the last plum blossom falls off the tree, Nanao puts it in the masked girl's hair as an accessory. After showing her a blooming peach tree, Nanao explains how the peach blossoms bloom when the cherry blossoms wilt. When the Tōjū from before attacks them, the weaponless masked girl is quickly defeated. However, Shunsui arrives and kills the Tōjū, saving Nanao and the masked part of Katen Kyōkotsu. That night, while at another party, the girl puts a blossom in Nanao's hair.

Immense Spiritual Power: As the Zanpakutō spirits of one of the most powerful captains of the Gotei 13, Katen Kyōkotsu possess an incredible amount of Reiryoku. Along with Sōgyo no Kotowari and Minazuki, their power was enough to keep Genryūsai Shigekuni Yamamoto's power at bay while he was within his barrier.Shunsui Kyōraku notes both parts of Katen Kyōkotsu have their own separate and distinct Reiatsu.[2] They fought evenly against Shunsui during their battle.[3] The masked girl visibly intimidated Nanao Ise by exerting her Reiatsu.[5]

Master Swordswomen: Katen Kyōkotsu are highly proficient in swordsmanship, fighting evenly against Shunsui, a master swordsman, during their battle. Shunsui himself noted they were holding back during their fight by not using his effective style of fighting: the masked girl usually confuses their opponent with her fast attacks, while the taller woman finishes them off with her slower and more powerful strikes.[3]

Enhanced Speed: Katen Kyōkotsu possess considerable speed, constantly keeping Shunsui on the defensive during their fight with swift attacks and movements.[3] The masked girl managed to move away twice without Nanao noticing, easily dodged all of the Bearded Tōjū's attacks, and quickly moved to the Bearded Tōjū in order to prevent him from attacking Nanao.

Enhanced Endurance: The masked girl is considerably resilient. She managed to get up and prevent the Bearded Tōjū from attacking Nanao despite having been incapacitated prior.

Shikai: Katen Kyōkotsu's released Zanpakutō take the form of a pair of large, black, heavily curved Chinese scimitars with silver edges, rectangular cross guards with cut-off corners, and dark blue handles, each with a long red tassel dangling from the end.[2] The masked girl wields a wakizashi, while the taller woman wields a slightly longer tachi. 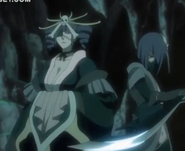 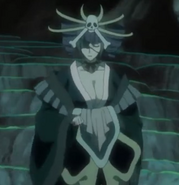 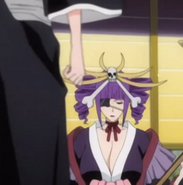 Add a photo to this gallery
Retrieved from "https://xianb.fandom.com/wiki/Katen_Ky%C5%8Dkotsu?oldid=388783"
Community content is available under CC-BY-SA unless otherwise noted.