Katrina (Japanese: カツコ Katsuko) is a character of the day in the episode Lights, Camera, Quack-tion.

While Ash was looking for a place to train for the Pokémon League, he met Katrina, who challenged him to a battle. However, before it could even begin,Team Rocket tried to steal Pikachu, but they ended up stealing Katrina's Raichu instead. After quickly defeating them, Cleavon Schpielbunk appeared and offered both Pokémon a role in his movie, Pokémon in Love.

When filming was completed, both Katrina and Ash expressed excitement at entering the Indigo Plateau Conference. 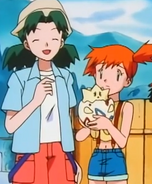 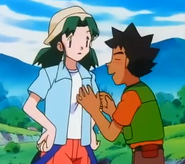