Crystal (Kim Possible)
Kimberly Ann "Kim" Possible is a high school student and freelance hero/vigilante. She is unusual in this in that she not only lacks a secret identity, but also remains on good terms with various law enforcement, government, and military agencies. For the most part, her classmates are aware of her work but do not comment on it unless it affects them directly. At school, she is cast as one of the "popular kids", head of her cheerleading squad at school, and a straight-A student, rather than as a misunderstood outsider/underdog as typical of the genre.

Prior to the start of Season 1, Kim was an ordinary young girl leading an ordinary life. By her preteen years she was wishing to supplement her allowance, so she decided to start up her own babysitting business and set up her own website: "KimPossible.com", under the slogan, "I can do anything" to advertise her services. Soon after her site went live Kim was accidentally contacted by Mr. McHenry who was in trouble and was trying to contact a different group of heroes, "Team Impossible", but because of a typing error he contacted "KimPossible.com" instead of "Impossible.com." After the rescue, Kim's fame as a hero grew until she was being contacted for help by people all over the world, including governments and royalty, as a matter of daily activity. This lead to a long and successful career as a teenaged heroine and a success rate which only added to her fame.

Kim was extremely athletic and had extensive reflexes, which had been honed and perfected through years of cheerleading practice and later on actual mission experience. However, Kim was already remarkably agile even before she became a cheerleader. Years later during Global Justice's research into The Ron Factor, she claimed that her genetics rocked, and while the truth of that claim was never verified, her paternal grandmother was equally if not more talented in similar areas, and all members of her immediate family have occasionally participated in her missions with notable ease despite no preparation beforehand, most especially her younger brothers.

Regardless of the source, this incredible skill allowed Kim to perform death-defying moves like somersaulting between laser beams and rockets with little apparent effort. She was also highly skilled in numerous types and styles of martial arts, knowing sixteen different types of Kung-Fu, including Mantis Kung-Fu. Her skills were aptly demonstrated by the fact that she was consistently able to go toe to toe against villains like Shego, an older and more experienced villain whose super-abilities allow her to tear through reinforced concrete with ease.

Kim was also a fast learner, able to pick up new skills quickly and adapt to new situations as they arose. Among the many talents that she has demonstrated were a high level of proficiency in various extreme sports such as hang-gliding, skiing and rock climbing. She was even able to figure out how to fly a shuttle enough to land it safely simply by observing Fredrick the monkey fly once. While on a mission, she also discovered her ability to hit high notes in song, which allowed her to shatter a layer of thick ice.

Kim was a very talented swimmer, which she used to great effect in many of her missions. She was a member of her school's swim team during her Sophomore year of school, has swam the English Channel, and was an accomplished SCUBA diver.

Despite her fame, Kim was surprisingly strong and was capable of easily hitting someone hard enough to knock them off their feet or even unconscious with a single blow. In addition, Kim was quite exceptionally skilled and learned in many different forms of hand-to-hand combat, and both armed and unarmed combat.

Kim has been mentioned as having gained a varied and ever-growing skill set throughout her mission work. She was regularly called on to serve as a babysitter, detective, unpaid bounty hunter, espionage agent, and perhaps most often as a legally accepted vigilante. In addition, Kim has had experience in a wide variety of fields, including firefighting, animal conservation/protection, natural disaster prevention/rescues, crop dusting, and hot air ballooning. 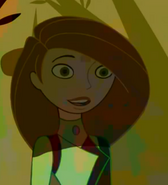