She is the Gym Leader of the Shalour Pokemon Gym. She is a fighting type Pokemon trainer.

Korrina made her anime debut in Mega Revelations!. She appeared before Ash and his friends, aiming to claim her 99th successive victory, eagerly challenging Ash to a battle. In the end, her Lucario easily defeated Ash's Pikachu, and the group decided to have a lunch together.

During the lunch, Bonnie noticed Korrina's Key Stone, and she revealed that she had received it from her grandfather. However, she was still lacking the Mega Stone to Mega Evolve her Lucario. After the group had saved Pikachu and Lucario from Team Rocket, Ash and his friends decided to join Korrina on her hunt for Lucarionite.

In The Cave of Trials!, Korrina, along with Ash and his friends, arrived in Geosenge Town. There, they met a photographer called McGinty, who gave them a hint of going to a nearby mountain. On the mountain, the group discovered a cave, where the Lucarionite was hidden. Protecting the Mega Stone, however, was a Blaziken, whom Korrina had to battle. Due to Blaziken having a type advantage over Lucario, Korrina was initially losing, but thanks to Ash and friends' encouragements, Korrina and Lucario were able to rise from the brink of defeat and immobilize Blaziken with Bone Rush. Just when Lucario was about to finish the battle, Korrina's grandfather, Gurkinn, came out of the shadows, admitting his defeat and allowing Korrina to take the Lucarionite. With the proper Mega Stone finally in her hands, Korrina started her Lucario's very first Mega Evolution.

In The Aura Storm!, after Lucario's first Mega Evolution, Korrina agreed to have a battle with Ash and Pikachu to test her Mega Evolved Pokémon's powers. However, during the battle, Lucario lost control, and it was only stopped from attacking Ash along with Pikachu by Gurkinn's own Lucario. Gurkinn explained that Lucario couldn't control its increased Aura powers after Mega Evolving, which was why it went berserk. Korrina then had another battle with her Lucario, this time against Gurkinn's own Mega Lucario. However, Korrina's Lucario lost control of itself again soon after Mega Evolving, and Gurkinn won the battle. Afterwards, Gurkinn sent Korrina and Lucario to Pomace Mountain to get help from a Mega Evolution Trainer.

She was seen in a flashback in Summer of Discovery!.

Korrina appeared again in Origins of Mega Evolution!, meeting up with Ash and company when they arrived in Shalour City. She reappeared in the following episode, where she and Ash had their Gym battle at the Shalour Gym, located inside the Tower of Mastery. At first, Ash attempted to copy Tierno's dancing battle strategies from the Pokémon Summer Camp, but wasn't successful. After switching back to his own style of battling, Ash proceeded to defeat both Korrina's Mienfoo and Machoke with Hawlucha and Fletchinder, respectively. Determined to still win, Korrina sent out Lucario and immediately Mega Evolved it. With this power boost, Lucario was easily able to beat Fletchinder and Hawlucha, leaving Ash with just his last Pokémon, Pikachu. Mega Lucario's overwhelming power gave Pikachu a lot of trouble, but eventually, after a fierce exchange of attacks, Pikachu was able to defeat Mega Lucario and win the match for Ash, thus earning him the Rumble Badge. She then told him that the next Gym was in Coumarine City and that the next Gym Leader was eccentric, but she believed Ash could help sort him out.

Korrina appeared in Clemont's flashback in The Future Is Now, Thanks to Determination!.

She was trained by Mabel and her grandfather Gurkinn. 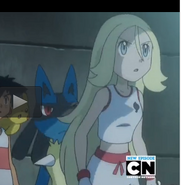 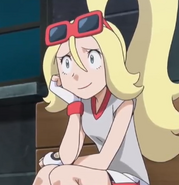 Add a photo to this gallery
Retrieved from "https://xianb.fandom.com/wiki/Korrina?oldid=256102"
Community content is available under CC-BY-SA unless otherwise noted.