In the end, she also tortures and kills Touji, but Touji holds no grudge, saying that behind everything she did, he felt an "Absolute Love". It then views in a small purgatory-like area where Marika and another client of Kyouko are all found. Later Touji later joins them after he is killed. At the end of the series, when the police ask Kyouko if she has seen Touji, she replies no. Later when the police find evidence in Kyouko's backyard, the police tell her that they have a question for her, and the scene fades out with Kyouko holding a knife behind her back and saying, "What could that be?...", 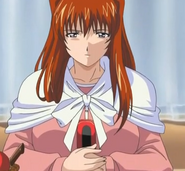