Inuyasha
She is a former lover of Inuyasha.

Kikyo is a priestess who lived fifty years prior to the events of the series. A very vengeful woman and quite cautious of who she trusts, Kikyo was given the task by the Taijiya clan to guard and purify the Shikon Jewel. She fell romantically in love with Inuyasha, who considered using the Shikon Jewel to turn him completely human so it would fade and she could live with him as a normal human. However, having had an indirect role in his creation, Kikyo is mortally wounded by Naraku posing as Inuyasha and believed the real Inuyasha betrayed her. Kikyo found Inuyasha, who also fell for Naraku's deception when he assumed Kikyo's form to antagonize the half-demon into attacking the village, and sealed him to the Sacred Tree. Though Naraku had expected her to use it to save her life, and corrupt it so he can have it, Kikyo dies after requesting to have the Shikon Jewel be burned with her body on the funeral pyre. Though Kikyo intended to keep it safe within her soul, the Shikon Jewel is brought back to the feudal era through her modern time reincarnation, Kagome Higurashi.

Kikyo is brought back to life when a demon sorceress named Urasue captures Kagome and transfers a fragment of her soul into a clay body made with graveyard soil and Kikyo's ashes, and kills Urasue. Due to her new nature, finding herself more free as she lacks emotions, Kikyo requires the souls of dead women to prolong her new life. Kikyo initially intends to kill Inuyasha before learning the truth that Naraku played them against each other, her feelings for Inuyasha rekindle a bit as the series progresses while expressing some jealousy towards Kagome. Regardless, Kikyo focuses her full attention on Naraku, who regards her as a threat yet could not harm her due to Onigumo's influence. But once Naraku manages to cast out Onigumo's soul, having witnessed the demon's heart being taken away from Mount Hakurei, Kikyo is mortally wounded and sent falling into a river of Miasma. Though Kagome manages to heal Kikyo, the lingering effects of the Miasma remain as she uses a fragment of Midoriko's soul to restore her body.

When Naraku learned that Kikyo was intending to destroy him the moment he completes the Shikon jewel, he attempts to kill her again after absorbing Onigumo's soul to maintain the jewel's deviled state. Kikyo's wounds begin to spread throughout her body, obliging Kagome to go to Mount Azusa to retrieve a sacred longbow with special spiritual abilities of its own to heal Kikyo. However, Kikyo conceals the fact that she sent Kagome to Mount Azusa to purify her of the miasma Naraku had tainted her with. Kikyo shares her last moments with Inuyasha and finally dies in his arms peacefully. Her unusually strong willpower is then transferred into Naraku's shard showing a tiny speck of purity in the darkness. When Naraku kills Kohaku after he finally had the will to live after apologizing to Sango, Kikyo's light within the shard decided to save Kohaku's life instead. In the end, she left the task of purifying the Shikon Jewel to Kagome, leaving herself to finally be a "normal woman". Before Kikyo died, her soul came to her sister Kaede in a vision, apologizing for everything that happened. 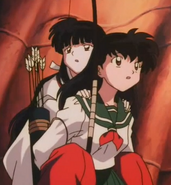 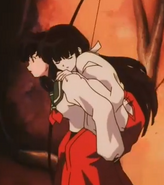 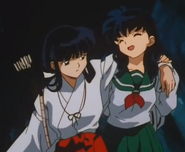 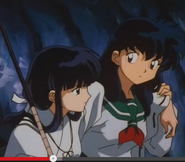 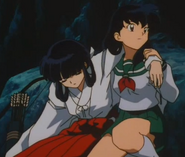 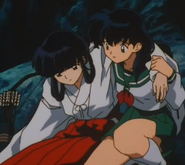 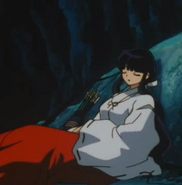 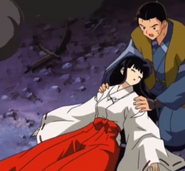 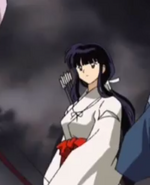 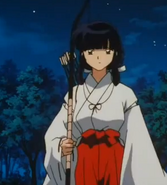 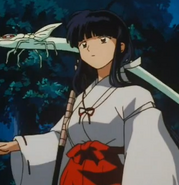 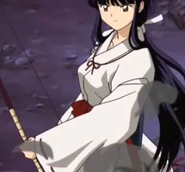 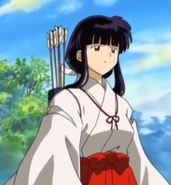 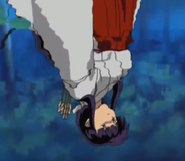 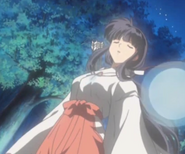 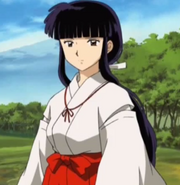 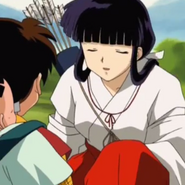 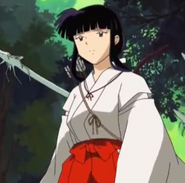 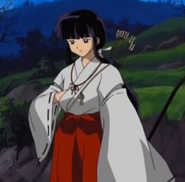 Add a photo to this gallery
Retrieved from "https://xianb.fandom.com/wiki/Lady_Kikyo?oldid=351382"
Community content is available under CC-BY-SA unless otherwise noted.