Xianb Wiki
Register
Don't have an account?
Sign In
Advertisement
in: Alliance to Restore the Republic, Slave, Driver,
and 46 more

Leia Organa (born Leia Amidala Skywalker) was a Force-sensitive human female who served as princess of Alderaan, a member of the Imperial Senate, a leader in the Alliance to Restore the Republic and New Republic, and the founding general of the Resistance. Through it all, she became instrumental in the defeat of the Galactic Empire in the Galactic Civil War and led the fight against the First Order. She was born nineteen years before the Battle of Yavin as the daughter of Jedi Knight Anakin Skywalker and Senator Padmé Amidala. After her mother died and her father fell to the dark side of the Force to become Darth Vader, Leia was adopted by the House of Organa. She took the place of her adoptive father, Bail Organa, in the Senate and helped lead the fight against the Empire.

During the war with the Empire, Organa was entrusted with the stolen plans to the Death Star, an Imperial superweapon capable of destroying entire planets. She also met and became friends with Luke Skywalker—who, unknown to either of them, was her twin brother—Han Solo, and Chewbacca, who helped her escape from captivity on the Death Star and return the stolen plans to the Rebellion. After the Death Star was destroyed during the Battle of Yavin, Organa continued to help lead the war effort and coordinate the operations of the Alliance. After the Battle of Hoth, Vader captured Organa and Solo on Cloud City to use them as bait to lure Skywalker there. Solo, with whom Organa had fallen in love, was captured by the bounty hunterBoba Fett, but the others managed to escape and rejoin the Alliance Fleet. Not long after, Organa aided in the successful rescue of Han Solo from Jabba the Hutt, in which she killed the crime lord and earned the title of "Huttslayer." Following Solo's rescue, she participated in the Battle of Endor as part of General Solo's team, with the objective of destroying the Death Star's shield generator. During the campaign, Organa learned that Vader was her father, and Skywalker her brother. Vader and the Emperor, Darth Sidious, perished during the battle.

The Battle of Endor left the Empire in chaos, and Organa assisted in the formation of the New Republic. When the war came to a close, Organa disagreed with the Republic's decision to disarm its military, believing that the remnants of the Empire could not be trusted to follow the peace treaty it signed with the Republic. During this time, Organa and Solo were married and had a child, Ben Solo. The boy struggled with the dark side and Organa sent him to be trained by Skywalker as part of a new generation of Jedi, but Ben turned against his uncle and destroyed the new Jedi, taking on the name Kylo Ren and becoming an apprentice of Snoke, the Supreme Leader of the First Order. Organa urged the Republic to take the threat of the First Order seriously and she formed the Resistance, an unofficial military group secretly funded by the Republic, when the Galactic Senate chose to ignore her warnings. After the Resistance destroyed the First Order superweapon known as Starkiller Base, an operation that resulted in Solo's death at the hands of their son, Organa sent a young Force-sensitive named Rey, who had helped destroy the Starkiller weapon, to find Skywalker and bring him back from his self-imposed exile to help save the galaxy. 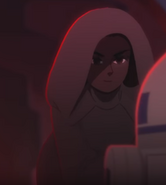