In the Superman Adventures comics, based on the DCAU animated series, Livewire makes an appearance in issue #5, "Balance of Power", the two-part "War Games" (#22–23) and in the two-part finale (#65–66), "Power Play", the latter also featuring Lex Luthor and Darkseid. She is portrayed more sympathetically in the comics, teaming up with Professor Hamilton and putting all of her energy into stopping Brainiac in "War Games", which puts her into a coma until she awakens in "Power Play", where she officially reforms. 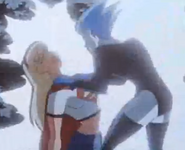 Add a photo to this gallery
Retrieved from "https://xianb.fandom.com/wiki/Leslie_Willis(Livewire)?oldid=408041"
Community content is available under CC-BY-SA unless otherwise noted.