Liberty Danielle "Libby" Folfax is one of the main characters in The Adventures of Jimmy Neutron: Boy Genius. She is a sassy African American girl first appearing in the Jimmy Neutron: Boy Genius film. She is Cindy's best friend and Sheen's love interest which seemed to have started in the second season. She is eleven years old (twelve starting from "The Tomorrow Boys" and onwards). She is voiced by Crystal Scales.

She also has a little brother (who's name has not been mentioned in the series) seen in the beginning of "Make Room for Daddy-O" as the legs in the saw the lady in half trick.

Not much is known about Libby's family, but she is known to have a father andmother. In "Beach Party Mummy," she discovers that her ancient ancestor is Queen Hasabataslapya.

Libby's main interest is music with the funky rhythm. When she experiences music withdrawal, she faints (as revealed in "Hall Monster"). She also loves electronic gadgets and being stylish. In the first season, she doesn't appear in the title logo. When she becomes more involved in the show, however, she is added to the logo in the second season and is still on it in the third season. Unlike Jimmy's best friends, Libby is shown to do well in school, but isn't at the level of Jimmy or Cindy in terms of intellect. According to "Nightmare in Retroville," Libby is a vegetarian.

Her favorite band is Graystar whom she has invited to Retroville twice (in "Attack of the Twonkies" and "The Tomorrow Boys"). She is also revealed to have piano playing skills (as revealed in "My Big Fat Spy Wedding" and "Vanishing Act").

Along with Cindy, Libby won a first place trophy for river stomp dancing at the school contest in "Battle of the Band;" Jimmy, Carl, and Sheen almost beat the girls with their electronic rock music guitars and drums, but at the last minute, Carl and Sheen destroyed their own instruments in a jealous quarrel, and the boys ended up with was an eighth place trophy after Carl did his giant snot bubble trick.

Libby has full knowledge about Jimmy and Cindy's relationship with each other, as Cindy does not want to express her feelings to Libby about it and stammers each time Libby mentions it. Although, Libby sometimes joins Cindy in teasing Jimmy. Libby once in a while returns Sheen's interest in herself, but not when Sheen is not annoying her with his overbearing mentions of Ultra Lord and occasional flirting.

In "Crouching Jimmy, Hidden Sheen", Libby was dressed up for a dance show at her school only to be abducted by Yoo-Yee and his ninjas in the middle of hers and Sheen's performance. Yoo-Yee used her as bait to lure Sheen into a battle. When she saw the fight starting, she escaped the room she was held in and contributed to her friends by giving them the ruby she put on her head earlier for the Ultra Shock Dance Teacher 8000. She even told Sheen that she was his girlfriend which easily encouraged him to fight back!

In "The N-Men", Libby gains the super power of invisibility, based on how she was putting on vanishing cream for her acne when she and the group were exposed to the Van Patten Radiation Belt. Libby calls herself "Invisible Sister". She learned in the military station that she also had the ability to generate a force field, and create a pad to float herself in midair.

In "The League of Villains", Jimmy, Carl, Sheen, Cindy and Libby's superpowered have been mixed up. Libby is the one who had ended up with Carl's superpower; Burp Boy. This made her gain the ability to make gigantic burps enough to make anyone go flying.

During the film, the first season and temporarily in "Beach Party Mummy," Libby had a green dress with blue and orange patterned rectangles on it. She also had a streak of her hair covering her right eye along with her hair in a high bun. She also had green socks with black shoes.

In "Beach Party Mummy," Libby had a new hairstyle with her hair in cornrow braids after gaining a makeover from Jimmy and her friends after Jimmy's Brain Blast to make Libby look like Queen Hasabataslapya and put the mummies to sleep for 10 trillion more years.

She also wore a swimsuit in "Jimmy on Ice" and "Beach Party Mummy." 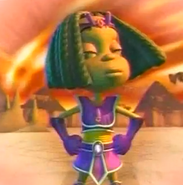 Add a photo to this gallery
Retrieved from "https://xianb.fandom.com/wiki/Libby_Folfax?oldid=374809"
Community content is available under CC-BY-SA unless otherwise noted.