She is one of the characters from the manga and anime Bleach by Tite Kubo .

Section 316 of the manga he discovers his past: he served as a lieutenant of the Eighth Division, and its captain was Shunsui Kyoraku . He sends it to shed light on the massacre of the 9th Division, which will take her to become a member of the Vizard.The same captain has a high regard for her.

See you on the earth in the company of the group of Vizard, summoned for training of Ichigo, and she will fight for the first against him. Along with Shinji and his companions towards Aizen Sousuke and with Hiyori Sarugaki start a fight against Tia Harribel . After releasing the Shikai, the clash will have an unexpected development: it will be interrupted by Aizen, who (apparently) will kill the last Espada.

The Zanpakutō Lisa is called Tonbo Haguro and releases it to Shikai command "shatters" (潰せ tsubuse ? ). Once released, it takes the form of a spear eastern from the blade broad and flat. 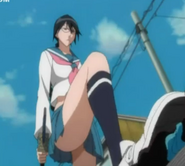 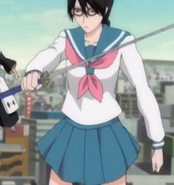 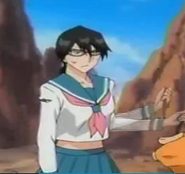