Liza (Japanese: ジーク Sieg) is the caretaker of the Charicific Valley, which was made specifically as a natural paradise for wild Charizard.

Liza made her debut appearance in Charizard's Burning Ambitions. She knew of a Trainer's win at the Violet Gym with a Charizard, and immediately deduced that that Trainer was Ash Ketchum, as she can identify Charizard Trainers by the lingering scent of their Charizard partner. She invited Ash and his friends to come with her into the valley, encouraging Ash to ride his Charizard as transport, somewhat questioning why—as a Charizard Trainer—he had never flown upon his (even though when Ash originally got Charizard to obey him in Charizard Chills, he also flew on it). She also questioned the strength of Ash's Charizard, indicating only 'weak' Charizard display their power through Charizard's typical stream of fire, and that it needed some serious training. Charizard wanted to train at the valley seeing the other powerful Charizard there, but Liza initially refused after it lost to her Charizard, Charla. But after seeing its determination to train there, she agreed. Liza made a brief cameo appearance in Spell of the Unown: Entei with Charla and all the other Charizard in the Charicific Valley. She could be seen watching the news coverage of the events unfolding in Greenfield. Liza later appeared in Great Bowls of Fire! bringing Ash's Charizard with her. It was revealed that she was good friends with Clair ever since they were young children. Liza often takes the Charizard from the Charicific Valley to Blackthorn City in order to train them. Ash would also call Liza sometimes whenever he needed Charizard sent over. Liza appeared in a flashback in The Fires of a Red-Hot Reunion!, again with Charla and all the other Charizard in the Charicific Valley. She sent Ash's Charizard to Professor Oak off-screen, so he could send it to the Unova region. 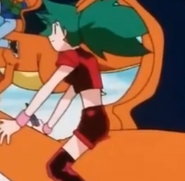 Add a photo to this gallery
Retrieved from "https://xianb.fandom.com/wiki/Liza_(Johto)?oldid=210543"
Community content is available under CC-BY-SA unless otherwise noted.