Actress Dana Delany played Lois Lane in the 1990s television series Superman: The Animated Series. Dana Delany based her performance of the character, on Rosalind Russell's character in His Girl Friday. In this version, series creator Bruce Timm and character designer James Tucker portrayed the character more like her original comic counterpart. In that at first her relationship with Clark Kent, was very much a rivalry about which was the better reporter, and she would at times actively attempt to trick him out of stories. But Lois eventually learns to respect Clark, and in episodes like "The Late Mr. Kent", takes a faked death of Clark significantly hard, admitting to Superman, that she regretted never telling her rival she respected and loved him as a person and a reporter. In this version, Lois constantly teases Clark by calling him "Smallville" (a line since adapted for mainstream comics).

At first, Lois was skeptical about Superman, but she grew closer to him throughout the series. Lois had mentioned that she previously dated Lex Luthor before she dumped him. In the three part story "World's Finest", Wayne Enterprises CEO Bruce Wayne arrived in Metropolis and starts a relationship with Lois, Lois actually considered moving to Gotham City, much to Clark's dismay. Lois ended the relationship when she discovers that Bruce is the infamous masked vigilante Batman. Superman and Lois did not share their first kiss until the final moments of this animated series' last episode "Legacy" (although Lois had kissed an alternate version of Superman in "Brave New Metropolis").

Lois Lane appears in the new comic book series Superman Adventures and is based on Superman: The Animated Series. It ran from November 1996 to April 2002 with 66 issues. All the character in the television series appeared in the comic books, along with new character introduced in the books. 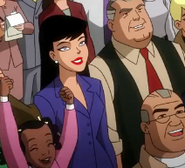 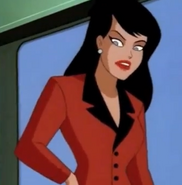 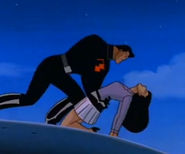 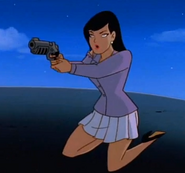