Son of the Frost Giant , Laufey, but was adopted by Odinand raised as the lesser brother of Thor wanting revenge on Odin and [[Asgard. His hatred led down to Earth, where he became a super-villain and faced many heroes.

Doctor Doom takes command of the Destroyer Armor. Thor has to convince the team to trust the one person who may be able to stop him who is Loki.

Thanks to the tricks of Loki, Hulk and Thor are tricked into a battle and transported to Valhalla to find out who is the strongest once and for all. But under Hela's rule, only the loser of their contest may return to Planet Earth while the winner will become her consort and champion. While this is happening, Loki uses Hela's horn to unleash an army of skeletons to invade Earth.

Thor is called into returning to Asgard as a guest to Asgard's Hall of Learning for the Learning Games as Hulk and Hawkeye follow him. The visions of Loki lure Thor, Hulk and Hawkeye into the chambers of the Learning Games where failure is a one-way portal to Valhalla. Meanwhile, earthquakes occur on Earth as the result of Earth and Asgard being pulled towards each other by the Space Gem which is in Loki's possession. 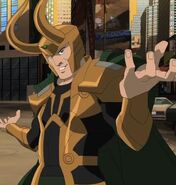 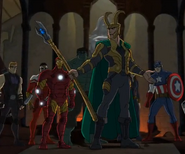