She was a kunoichi from Kumogakure, and the Fourth Raikage's assistant.

Mabui first appeared alongside the Fourth Raikage after Sasuke Uchiha and Killer B's battle at the Valley of Clouds and Lightning, where she was ordered to make arrangements for the Kage Summit.

Mabui was speaking to A about preparations for the Summit and expressed that A has broken a window through again, much to her dismay.

When B was found by the Raikage, Darui and C and returned safely to the village, she thanked everyone for their hard work and asked for detailed information on what occurred at the Kage Summit. She later attended a meeting of the leaders of the Allied Shinobi Forces with the Raikage.

Remaining at headquarters, Mabui was present when they were informed about the forces opposing the First and Fourth Divisions. She helped to seal Kinkaku by using the Heavenly Transfer Technique to send the Kohaku no Jōhei to Darui on the battlefield. Later, after learning how the enemy White Zetsu Army had infiltrated the Alliance's ranks disguised as shinobi, and, under the cover of night was murdering shinobi sending the forces into near chaos, she surmised that the whole reason for the battle during the day was in preparation for their current assault.

As Mabui aided Shikaku Nara in going over all the intel that they had at their disposal, Shikaku came up with the idea to utilise Naruto's ability to sense negative emotions to uncover the clones that had infiltrated their ranks, she stated that the plan was not viable as the Raikage would never allow Naruto to participate in the war, a fact which Shikaku lamented. However, Katsuyu then told them that it might in fact be an option due to the Raikage finally allowing Naruto and B to pass him and enter the fray, an occurrence which baffled Mabui greatly.

After the real Madara Uchiha was reincarnated and summoned to the battlefield, Tsunade declared that she would be heading to the front-lines, and demanded that Mabui get her teleportation technique ready, intending to use it to travel to the battlefield. Mabui, however, objected to this, claiming that it wasn't intended to be used on living targets, going even further to note that only the Third Raikage would be able to endure the technique due to his special body. Another method of travelwas proposed but Tsunade rejected it, claiming that she can use her Creation Rebirth technique to counteract any damage her body suffered. Mabui pleaded for A to make Tsunade change her mind, but A simply ordered her to prepare the technique for two people instead of one. An exasperated Mabui again voiced her concern, now sought help from Shikaku in convincing the two Kage not to attempt to endure the transfer. Shikaku simply tells her it's time for the Allied Shinobi leader to make an appearance on the battlefield prompting Mabui to reluctantly prepare the technique, before hesitantly activating it and transporting A and Tsunade to the coordinates given by Dodai.

As the Ten-Tails reached maturity, the beast fired a Tailed Beast Ball straight towards HQ, killing Mabui and the other inhabitants.

Mabui made a minor appearance when she and A are having a talk about the Box of Ultimate Blissfrom the Hōzuki Castle with Team Samui until she was knocked out unconscious along with Samui's team from the sleep smoke. 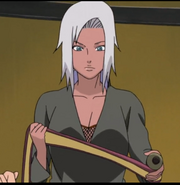 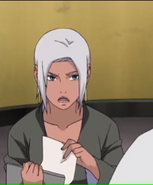 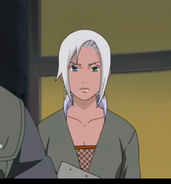 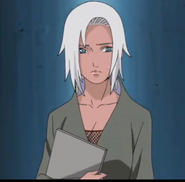 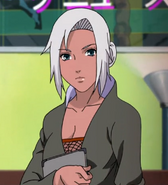 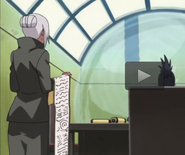