Mai was the daughter and eldest child of Ukano, the former governor of New Ozai and his wife, Michi. During the last year of the Hundred Year War, she became one of Princess Azula's main allies, and therefore one of Team Avatar's greatest foes, as well as Prince Zuko's love interest once he returned to the Fire Nation. As one of the most privileged girls in the Fire Nation, she attended the Royal Fire Academy for Girls and became a friend of Princess Azula and Ty Lee at a young age.

Mai was exceptionally proficient at throwing stilettos, a self-taught skill she developed out of boredom. Using small knives similar to ninja shuriken[3]and spring-loaded stilleto holsters concealed in her robes, she was capable of besting numerous benders at once, despite not being a bender herself. She was recruited by Azula along with Ty Lee to capture the Princess' brother and uncle, as well as the Avatar and his friends.[4]

Mai outwardly resembled an impassive and apathetic teenager. A victim of her father's political aspirations since early childhood, Mai confessed she got anything she wanted from her parents so long as she was quiet, well-mannered and perfectly behaved.This had a profound effect on her personality, as it was deeply ingrained in her to keep all of her feelings and emotions strongly hidden. The only time she was ever seen happy was in the presence of Zuko, whom she loved deeply.

The strength of her feelings toward Zuko was revealed when she saved him from Azula at the Boiling Rock. She confronted Azula, declaring that her love for Zuko outweighed her fear of retaliation. As a result of this betrayal, Azula imprisoned her, along with Ty Lee, who stopped Azula's attack byblocking her chi.[6] She was later released after Zuko defeated Azula and claimed the throne. They restarted their relationship with a kiss before Zuko's coronation as the new Fire Lord,though Mai broke up with him a year later.[8]

Mai was born in the Fire Nation to a noble family. She was an only child for thirteen years and was given whatever she wanted, as long as she behaved. Her parents were strict and they constantly required her to stay silent and behave perfectly, which in later years led to her emotional distance.[5] She greatly despised her life in the Fire Nation, to the point that she would throw knives at her wall out of boredom, a habit that eventually allowed her to develop a skill in fighting with weapons.[9] She later attended the Royal Fire Academy for Girls and became friends with Ty Lee and Azula, who noticed Mai's skill with knives.[4]

One particular day, when she was about ten years old, Mai sat off by herself under a tree, looking disinterested as Ty Lee and Azula played together and did cartwheels. However, she did show marked interest in Zuko, turning away shyly and blushing when he walked by with his mother. Azula noticed this and took Mai's obvious crush, which Azula later revealed to have been mutual, as a cue to humiliate both Zuko and Mai. Mai was ordered to balance an apple on her head which Azula set aflame. Zuko was subsequently tasked to knock it off her head, though the entire scheme ended up with both of them falling into a fountain on top of each other, much to the amusement of Azula and Ty Lee.

Before joining Azula, Mai unwillingly resided in the newly conquered city of Omashu with her mother, infant brother, Tom-Tom, and her father, the Fire Nation-appointed governor of the city-state. Mai described Omashu as "unbearably bleak" to her mother and complained of how bored she was, stating that she was even more bored than she was back in the Fire Nation. Welcoming the distraction, she did not hesitate to go on the attack when the Omashu Resistance failed in their attempt to crush her and her family under a boulder. Thinking Aang and his friends were responsible, she pursued them until the resistance helped them escape.

Soon after, Azula arrived in the city, with Ty Lee in tow, to recruit Mai to assist her on a special mission. Desperate to get out of Omashu, Mai agreed to this immediately even though she had not been told what that mission was. Before leaving, however, Azula appointed Mai, in lieu of her father, to oversee a pre-arranged hostage trade: King Bumi for Tom-Tom, her baby brother, who wandered out of the city with a group of fleeing citizens and was subsequently assumed "kidnapped" by the resistance. However, right before Mai began the transaction, Azula interrupted, coyly suggesting that trading a powerful earthbender king for a two-year-old was strategically unwise. After a measured pause, Mai agreed and declared the deal off, thus initiating a fight between the two sides. Initially, she was overwhelmed by Katara's waterbending skills until Ty Lee blocked her opponent's chi. Mai was about to finish Katara off before Sokka knocked her weapon away with his boomerang. Later, as Mai, Azula, and Ty Lee were leaving the city, Mai confirmed, impassively, that their mission was to "track down" the now-fugitive Zuko and Iroh, though Azula noted that they also had a third target, Aang.

Mai, Azula, and Ty Lee tracked Aang and his companions, and once Aang split from Katara and Sokka, Azula sent Mai and Ty Lee to face them while she chased down Aang. Mai and Ty Lee defeated the siblings rather easily, much in part thanks to the siblings' lack of sleep, though they were caught off-guard by an air blast from Appa and sent flying into a nearby river.

When a Fire Nation drill was heading toward Ba Sing Se, Mai expressed her boredom by twirling a shuriken around her fingers. When a group of elite earthbenders attempted to stop the drill, Azula sent Mai and Ty Lee to face them, which elicited approval from Mai as it was something to do. However, when Azula sent Mai and Ty Lee after Sokka and Katara, who were caught trying to sabotage the drill from the inside, Mai refused to chase them into the slurry pipeline, stating that despite how much lightning this act of defiance might cause Azula to throw at her, she would not go into that "wall sludge juice"—which gave the impression that Mai was not scared of the princess. Later, Aang destroyed the drill by causing the slurry pipeline to back up and explode, thus covering everyone in the general vicinity in slurry. After this, a completely pristine Mai leaned out of a hatch and dryly announced to the sludge-drenched Ty Lee and Azula: "We lost."

Mai later assisted Azula in attacking Suki and the other Kyoshi Warriors, stating that their colorful makeup and uniforms were making her nauseous.[13] After the three girls defeated the Kyoshi Warriors, Mai, Azula, and Ty Lee donned their uniforms to sneak into Ba Sing Se. On Azula's orders, Mai and Ty Lee deliberately talked about their Fire Nation origins in the open, banking on the Dai Li to be spying on them and relaying the message to Long Feng.

While lingering in the Earth King's throne room, Mai and the group were surprised by Katara who ran in with news about Zuko and Iroh. Azula said she would tell theEarth King, but Katara realized who they were because of Azula's amber-colored eyes. Ty Lee paralyzed her with a chi strike before she could escape and the trio proceeded to capture the waterbender.[14]

During the Coup of Ba Sing Se, Mai sat in the throne room with Ty Lee, apparently having been ordered to guard the Earth King's pet bear, Bosco, but did not care enough about her assignment to attempt to stop Sokka, Toph, and Earth King Kuei from retrieving the pet. She was so bored and restless from her duty that she let Toph, Sokka, and Kuei escape with the bear, stating, "Just take the bear."[15] 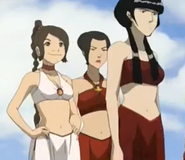 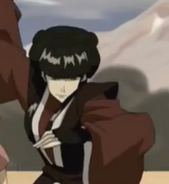 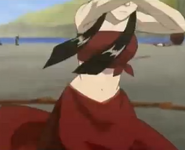 Add a photo to this gallery
Retrieved from "https://xianb.fandom.com/wiki/Mai?oldid=377810"
Community content is available under CC-BY-SA unless otherwise noted.