A woman who works for Emperor Pilaf. Together, Mai and her teammate Shu carry out the work of their ambitious Emperor, who is both short of stature and temper. Mai is definitely the brighter of the two, but even she manages to bungle things, particularly when Goku and crew become involved.

Before the events of the movie Dragon Ball Z: Battle of Gods, it is explained that the Pilaf Gang gathered all the Dragon Balls themselves and wished for youth, but Shenron made them a little too young.

When Trunks calls over Goten, the Pilaf Gang mistakes Goten for Goku because they look exactly the same. They immediately freak out and leave Capsule Corporation. However, Mai stops and gives Trunks the diamond she accidentally stole and ran away. Trunks develops an instant crush on her and when he claims that Mai is his girlfriend just to boast to Goten, everyone takes it seriously. Outside, Mai is shown to have stolen te four-star Dragon Ball and has a plan to get money from the party. Trunks comes along to invite them over to his mother's party requested by Bulma. Trunks gets Mai to agree on convincing people that they are together, but she gets really shy and goes through with it as an excuse to stay at the party.

When asked how old she is, Mai says she is 41, making Bulma laughs. Also during the party, just before the Bingo game starts, Mai accidentally drops the Dragon Ball she stole and then decides to hold Trunks hostage by pointing a gun at him. No one at the party is fazed by the threat and the drunken Gohanmakes it seem like a show for everyone by asking Mai to shoot him. He snaps all the bullets with one finger, but one of them hits Videl's leg and another one hits Beerus' forehead. Dende heals her, noticing that Videl is pregnant. Mai and the Pilaf Gang flee from the party when the God of Destruction Beerus gets angry and starts fighting the Z Fighters.

In the end, Trunks and Mai are sitting happily together in a tree. Trunks elbows Mai to get her attention and she smiles while looking at him. 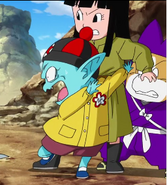 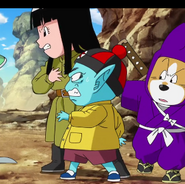 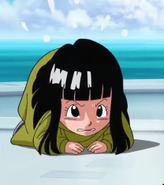 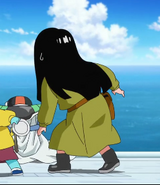 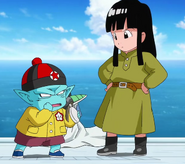 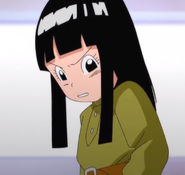