As long as this card remains face-up on the field in face-up Attack Position, it is not destroyed as a result of battle. Put a "Maiden Counter" on a monster that attacks this card.

This face-up Attack Position card cannot be destroyed by battle. If this card battles an opponent's monster, place 1 Maiden Counter on that monster at the end of the Damage Step.

The Duel begins, with Syrus, Chumley, Zane and Alexis Rhodes all watching. Blair Summons "Maiden in Love" in Attack Position, while Jaden Summons "Elemental Hero Avian" and attacks "Maiden in Love". She can't be destroyed in battle while in Attack Position, but Battle damage still occurs. Winged Kuriboh gives Jaden a look at what is happening in the spirit world, and "Avian" is kneeling beside "Maiden in Love", apologizing for harming her. Jaden tells "Avian" to pull himself together, perplexing the others, as they cannot see monster spirits as Jaden can. Blair reveals that any monster who battles with "Maiden in Love" receives a Maiden Counter, which manifests itself on "Avian" as a heart symbol. Blair equips"Maiden in Love" with "Cupid Kiss" and attacks. Jaden sees "Maiden in Love's" spirit run towards "Avian", professing her love for him. She trips, and "Avian" attempts to help her. She tells him to attack Jaden, and he does. Blair reveals that if "Maiden in Love" attacks a monster that has a Maiden Counter while equipped with "Cupid Kiss", control of that monster switches to Blair. She Sets a card to end her turn, and Jaden Summons "Elemental Hero Sparkman" and attacks "Avian". Blair activates her face-down "Defense Maiden", switching the attack target to "Maiden in Love", so "Sparkman" gains a Maiden Counter. Jaden sees "Avian's" spirit scolding "Sparkman" for attacking the maiden.

Blair activates "Happy Marriage", equipping it to "Maiden in Love", causing her attack to rise by that of "Avian". She then attacks "Sparkman" with "Maiden in Love", and the former is put under Blair's control due to the Maiden Counter and the effect "Cupid Kiss". Both "Avian" and "Sparkman" attack directly, reducing Jaden to 400 Life Points. Believing a female monster might prove effective, Jaden Summons "Elemental Hero Burstinatrix". She calls both of the male Heroes pathetic, and Jaden plays "Burst Return", with "Burstinatrix" commanding both "Avian" and "Sparkman" to come back (in the dub, she also threatens them that she will tell the entire Deck about them falling in love with the "Maiden"), and enabling Jaden to place both of his male "Heroes" back into his hand. He then plays "Polymerization", fusing "Burstinatrix" with "Avian" to Fusion Summon "Elemental Hero Flame Wingman". He attacks, reducing Blair's Life Points to zero. 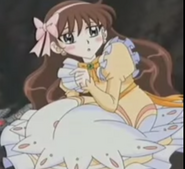 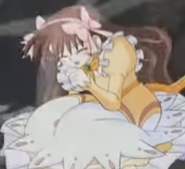 Add a photo to this gallery
Retrieved from "https://xianb.fandom.com/wiki/Maiden_in_Love?oldid=336974"
Community content is available under CC-BY-SA unless otherwise noted.