Maka Albarn (マカ・アルバーン, Maka Arubān) is a Scythe-Meister(鎌職人, Kama Shokunin) and the daughter of Spirit Albarn and his ex-wife.[1] After witnessing her father cheating, she was inspired by her mother and she became determined to follow in her footsteps and became a Meister. Maka partnered up with the "Demon Scythe" Soul Eater, in an attempt to create a Death Scythe more powerful then her father.She is currently a Two-Star Meister, a Death Scythe Meister, and formerly a member of Spartoi.[3][4] She stands out as the lead protagonist of the Soul Eater series.

Anti-Demon Wavelength (退魔の波長, Taima no hacho): Maka possess a rare, specialized Soul Wavelength in which has the power to drive away evil and it's impurities.[1] This allows her to slay evil magic users,[2] Demons, and potentially even Immortals[3] with the usage of the Great Traditional Techniques of the Scythe-Meister, in which carries her special Soul Wavelength.[4] This also gives her limited resistance against Magic such as Arachne's Magic[5] and immunity against other lesser forms of Madness such as Arachne's Madness as well as "cut through the darkness" and can be transferred to her partner,[6] voluntarily to others on her own with physical contact,[7]or through Soul's Piano.[8] In the anime, it is explained that she inherited this special Soul Wavelength from her mother.

Soul Perception (魂感知, Tamashī kanchi): Maka herself possesses a keen sense of Soul Perception, developing it to new heights throughout the series. Not only can she sense souls herself, but also attributes and estimated capabilities[9] and later even the emotional state of others.[10] Black☆Star onced commented on her Soul Perception abilities being like that of a "walk in' radar".[11] According to Franken Stein, it's also possible for her to gain a boost for her Soul Perception through Soul himself,[12] in which is proven to be true when Maka was capable of searching all around the world and accidentally found the Kishin Asura's hiding place.[13]

Grigori (グリゴリ, Grigori): Maka also possesses a extremely rare type of soul in which only one in fifty million people have. Due to being a Meister she is in need of a advance weapon to unlock her Grigori powers. With her soul and the usage of an advanced Death Scythe with a high level of wavelength control in which comes with a Death Scythe when they acquire a Witch soul that allows for almost magic-like powers, she can possess the ability to flight with the Demon Scythe.[14] Doing so requires her and her partner to be on the same page during their resonance.[15]When in flight, her max speed is able to keep up with Gopher, who also possess a Grigori soul that once made him outpace Maka and Soul initially as well as dodge their attacks.

White Grigori Armor :Maka is able to utilize a Soul Resonance with Soul Eater and formed a protective dress. Formerly, the dress contained Black Blood but during her fight with Asura on the Moon and needing to exit his body, the Black Blood was completely removed from the dress and Soul. This dress still enables and allows her to fly and functions as some sort of protective armor. It is unknown, however, how much the Black Blood itself contributed to the protection of her dress.

Witch-Hunt (魔女狩り, majogari): A Special Art in which allows the scythe weapon in which she wields to take a different form from it's blade after initiating a Soul Resonance. This form allows her to injure/kill beings susceptible to it's criteria such as Witches, Demons, Immortals, and even Demon Tool Soldiers as well as cancel out select spells. These arts have enabled her to perform permanent damage on the immortal Werewolf, Free as well as defeat Gopher.

Demon-Hunt (魔人狩り, Majingari): Remarked by Soul Eater to be the "Witch-Hunt beyond the usual Witch-Hunt", this attack is a Power Up version of the Witch-Hunt. As the name implies, the attack is assumed to be remarkable enough to kill Demons and has been seen able to greatly damage Clowns and Bloodsuckers (in the anime). It also carries Maka's Anti-Demon Wavelength and has been seen able to kill even Medusa Gorgon in the anime.[19] She's also managed to break through Crona's defense with this technique while using Death Scythe.[citation needed]

Kishin-Hunt (kishingari) :The final of the three Great Traditional Techniques of the Scythe Meister, Maka can utilize the Kishin-Hunt, in which is a more Power Up of the Demon-Hunt. Not much, however, has been shown from this particular form as it failed against Asura.

Scythe-Handling Mastery:Although she was initially inept in Scythe-Handling and was once revealed to be one of her main insecurities while in the Envy chapter of the Book of Eibon, it seems Maka no longer needs to rely on Soul to do much of the spinning and work. During her fight with Crona, she used Death Scythe against the latter, showcasing she not only got over her insecurity but went as far to seemingly even master it, being able to spin and twirl the Scythe even from her legs.

Danger Sensing: Maka has the ability to ominously sense danger in which may be far too much for her to handle. She displayed this ability only once prior to her meeting Crona for the firs time, in which eventually led to her first defeat and was nearly killed.

Utility Meister (ユーティリティ職人, Yūtiriti Shokunin): Although Maka is primarily a Scythe-Meister, she can also wield other sort of weaponry.

Exceptional Athleticism: As a Meister, Maka herself has an excellent level of athletic ability. Her athleticism has garner comments from Soul, who considers Meisters to be "something else"[38] She was also able to run 100 meters in 8.92 seconds.[25] Her athletic ability was renowned enough to be compared to Patty Thompson when she showed amazing physical ability herself.[39]

Hand-to-Hand Proficiency: Like many Meisters, Maka herself possess proficient ability in unarmed hand-to-hand combat. She often shows this when she punishes her weapon, forming jump kicks to him when angered.[40] She also tends to mix in both kicks and sometimes punches within during her battles with her chosen weapon on hand.[41] During her fight with the Kishin alone in the anime, she was skilled enough to close in on the Death God and punch him.[1] Her skill and usage in with her unarmed skills alone seemingly overwhelms Crona If not for the latter's own Black Blood.

Immense Durability: Despite her age and being human, Maka is a surprisingly durable individual. She was able to withstand Crona's Screech Alpha,[45]punishment from Free even after the later even slammed her with his Ice Shackle Bullet spell and overpowered her with his own martial arts and physical abilities as was still able to fight.[46] She was also able to take Arachne's hits within her disembodied from[47] In the anime, she withstood Vajra's laser attack, though Asura himself was weakened from his fight with Death, Black☆Star, and Kid. She also survived being slammed to the ground much to the Kishin's surprise.[1] Immense Power: Maka Albarn is considered to be a dangerous opponent and is held in regard as a threat by evil magic users such as Medusa Gorgon, who finds her Soul Perception abilities dangerous and claimed that with Joe Buttataki deceased that she remains as the most "dangerous element" and nearly opted to kill her shen she surprised her prior to being foiled.[48] Arachne Gorgon also considered her a threat with her Anti-Demon Wavelength and Soul Perception abilities.[49] This has caused her to be a target of assassination by even Noah (Greed).[50]

Culinary Ability: Maka possess some proficiency in cooking enough to make at least a decent breakfast for both her and Soul.

Although a immensely skilled Scythe-Meister of her own, Maka herself suffers from a variety of weaknesses. While proficient in her hand-to-hand combat, her skill in such area is not on Black☆Star's level and even incurred an embarrassing moment from the assassin much to her dismay at the time.[52] In addition, it seems that even Patty Thompson surpasses her ability according to Ox Ford and Harvar D. Éclair.[39] In the Envy chapter, it's even revealed that the chapter's projections of her insecurities point out Maka feels she's even weaker then Patty despite the latter being a Demon Weapon and harbors some level of jealousy towards it.

Without the assistance of Soul, her capabilities diminish greatly and she's even aware of such a fact and have exaggeratedly stated that without Soul she can't do anything and both of them use each other to get stronger.[54] While in the Sloth Chapter of the Book of Eibon, even she admitted that she's not as strong as either Black☆Star or Death the Kid and as shown in the Sloth chapter, she's aware of this to the point she was affected by the chapter itself and felt she was only a burden to her weapon partner.[55] Needless to say, another addition insecurity was her Scythe-Handling skill, in which were unrefined and couldn't even twirl a mop and was another insecurity and felt that If she didn't practice that Soul would leave her for another Meister partner.[56]

This weakness no longer applies, however, as she seem to have put in practice and showncase the ability to twirl a Scythe weapon while using her father's weapon form against Crona.[57]

Maka herself also has her own limits and has met her match a variety of times. In her first duel with Crona, she not only lost but witnessed her weapon partner badly injured.[58] She also found that Franken Stein was far out of her league and even saw his soul and became afraid of him to the point she nearly broke down in fear.[59] During the previous year in the Death Festival tournament, it's revealed that she has lost to Black☆Star the year before[60] She also was no match for bothMosquito in his 100 Years Ago and required Soul's Piano to and a Chain Resonance (Along with the entire group)[61] nor Giriko, in which not only nearly had her killed[62] but even revealed that she has a variety of issues facing an opponent who's abilities allows them to have a lot of "direct power".[63] She was also outclassed by Free in his werewolf form, with her citing his physical abilities were incredible even.[64] Even at her max, she was not only no match for the Kishin and was pinned by the god,[65] but even claimed herself that without the aid of Death the Kid and Black☆Star, she wouldn't even land a single blow on the Kishin by herself.[66]

Maka also has been criticized by many of her opponents to lack raw power herself, with both Crona and Ragnarok consider both her and even her weapon partner to be "weak", with Ragnarok going far enough to say she's a "small fry" and looks less tasteless compared to the likes of Black☆Star.[67] Even the assassin himself, when he was angry at Maka, cockily stated that he wouldn't ever "suck that bad" like Maka after flipping her over.[68] Asura himself also held a very low opinion of her, calling her "human scum" and felt the need to make her "learn her manners"[69]and in the anime, expressed disappointment that his final opponent was a weak, "little girl" and even stated her friends were far more powerful then her.[1] However, many opponents who point this out are occasionally subjected to a defeat from Maka and in some cases, can be a instance of underestimation.

When in use of her weapon powers, Maka can only enter this state while unconscious and once awaken, loses the ability to do so. 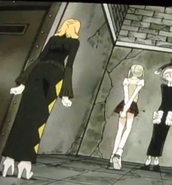 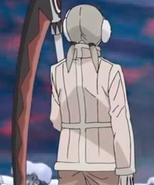