In the absence of Moff Arihnda Pryce, the Imperial Governor of Lothal, Tua was tasked with overseeing Lothal's industries, making certain they all operated at peak efficiency for the Empire.[5] However after a string of failures to put down a growing rebellion on her homeworld, Lothal was visited by Grand Moff Wilhuff Tarkin, the Imperial Governor of the entire Outer Rim. He berated her and the other Imperial leaders for their failures, even executing CommandantCumberlayne Aresko and Taskmaster Myles Grint for their incompetence, and took control of the situation himself.

However, Tarkin's efforts ultimately resulted in the rebels destroyinghis own flagship, the Sovereign, and the death of an Imperial Inquisitor. In retribution, Tarkin ordered Tua to located the rebels. Despite doubling patrols, setting up security checkpoints, and establishing curfews, she was unable to discover the whereabouts of the cell. In response, the Emperor dispatched his chief enforcer, theSith Lord Darth Vader, to deal with the situation. Having failed the Grand Moff, she was summoned to meet with him in person the next day to atone for her failure.

Fearing for her life, she managed to contact the cell and arrange for passage off of Lothal, in exchange for a list of rebel sympathizers on Lothal and its neighboring systems, and information regarding the Empire's true mission on Lothal. Vader, however, suspected she would run, and decided to use her to draw out the rebels and lead them to the larger rebellion. Kallus, an agent of the Imperial Security Bureau programmed a spy droid to shadow the minister, and then personally escorted her to her shuttle for her meeting. However, the cell attacked the shuttle that day, and a rebel orders Tua to board the ship, telling her that they would be right behind her. As she entered the trooper compartment, the vehicle exploded, killing the minister.

The Empire framed the rebels for Tua's assassination using footage that the spy droid took of the attack, when it was in fact them who rigged the shuttle to explode. The populace having been turned against them, the rebels fled Lothal with a transmitter aboard their ship, leading Vader and two Imperial-class Star Destroyer to the rebels and an affiliated cell.

Tua was born on Lothal. At some point, Tua left Lothal to join the Imperial academy. After graduating, she was elected as minister of Lothal.

As Lothal's minister, Tua played a key role in the planet's affiliation with the Empire. One of her initial actions as minister was bringing new government-sponsored housing to Lothal. These homes were reasonably affordable, and helped the growing population. In the absence of Governor Pryce she had been tasked with protecting the Empire's industrial interests.

Maketh was once on her way to the planet Garel, accompanied by Amda Wabo, a weapons manufacturer, and two droids, known as R2-D2 and C-3PO. She had been tasked with picking up some some T-7 Ion Disruptors, which, following their involvement with the destruction of Lasan, had been banned throughout the galaxy.

Since Tua wasn't fluent in Aqualish, she had brought C-3PO along, due to his vast knowledge of languages. Unfortuantely, her shuttle's pilot, RX-24, requested her droids be sent to the back of the ship. Without herProtocol Droid to translate, Tua was incapable of communicating with her business partner. It was then that arebel named Sabine Wren, undercover as a "level five Imperial Academy student", convinced Tua to allow her to translate for Wabo. In typical rebel fashion, Sabine used Wabo's information for her crews' own gain, tricking Tua into heading to the location.

After realising Sabine's true intentions, Tua ordered all her men to the rebels' location. There, a firefight ensued between the two factions, until the rebels made off with the T-7's in their ship, the Ghost.

Soon after this event, Tua contacted the Imperial Star Destroyer, the Lawbringer, and told ISB Agent Kallus about the rebels. The rebels' were eventually confirmed to be the same that Kallus has faced not long ago, on the planet Kessel.

Minister Tua was present at the Empire Day parade where she stood in for Governor Arihnda Pryce. She introduced the citizens to the new TIE Advanced prototype which was to be piloted by BaronValen Rudor, until it was destroyed by the rebels. Tua was angered by this and wanted the rebels to be punished.

When Agent Kallus engineered a plan to trap the Rebels Tua suggested following the Inquisitor's Tua worked closely with Agent Kallus during the course of the operation but was subdued by stun gas. She urged Agent Kallus not to let the rebels escape.

Following the latest failed attempt to stop the rebel cell, Grand Moff Tarkin arrived on Lothal to take charge. Tua personally greeted the governor in the hangar of the Imperial Headquarters, nervously expressing her pleasure and surprise to have him on Lothal. Tarkin quickly admonished her for failing in her task to protect the Empire's industrial interest and allowing the rebels to flourish under her nose. Tua couldn't manage a retort and merely choked out an awkward cough of agreement. She was not alone in this humiliation as Tarkin proceeded to mock Kallus and The Inquisitor as well.

Some time later she, Kallus and the Inquisitor were summoned to Tarkin's office and stood at attention behind him as Commandant Aresko and Taskmaster Grint arrived. Tarkin questioned the two on their ineffective methods and consistent lack of results, going so far as to suggest their failures could inspire hope in the public and undermine the security of the entire Empire. Tua looked on in horror and disgust as Tarkin had Grint and Aresko executed to serve as a warning to her and the others.

When Minister Tua requested Rebel aid instead of taking the blame for the Empire’s loss at Mustafar, she was sent by Darth Vader to see Wilhuff Tarkin off-planet. She secretly had the rebels infiltrate the Imperial command center in Capital City while she was away. Kanan Jarrus disguised himself as a Stormtrooper Commander to get past security, but was caught by Agent Kallus. Their cover blown, Tua fled to her escape shuttle, which had been rigged by Vader to explode. Tua was killed in the blast, and the Empire blamed the rebels for her death.

Having studied abroad on worlds more cosmopolitan than her native Lothal, Tua considered herself above the people of a "barely civilized Outer Rim world." She enjoyed the refined conversation of fellow intellectuals, and resented having to deal with unsavory types in her imperial duties. Despite her devotion to the Empire and to increasing her own standing, Tua displayed some degree of care for the citizens of Lothal, and appeared completely sincere in her beliefs that the Empire was doing good for the people. She displayed genuine gratitude and identified with Sabine Wren as a former Imperial Academy student, encouraging her to study hard. She generally tried to appear polite and dignified but was easily annoyed and could turn angry in the blink of an eye, typically with the likes of Commandant Aresko.

Though not a soldier herself she often found herself at the center of conflict and rarely displayed any weakness, even in the intimidating presence of The Inquisitor. Her confident bravado was only diminished byGrand Moff Tarkin who not only reprimanded her for her failures but threatened her life. Genuinely believing that the Empire was a force for good and order, she at first did not understand that Tarkin was going to execute Aresko and Grint, shaking her head in confusion - then gasping in horror when she realized what was going to happen, a split second before they were both decapitated.

Tua would realize the true tyranny and oppression that was the Empire, causing her to have a change of heart and even aid the Rebels. Alas, it would also cost her her life. 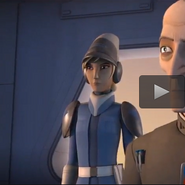 Add a photo to this gallery
Retrieved from "https://xianb.fandom.com/wiki/Maketh_Tua?oldid=455958"
Community content is available under CC-BY-SA unless otherwise noted.