Mana (マナ Mana) is a childhood friend of Atem and Mahad and studies magic under Mahad as his apprentice. She is a light-hearted, open, playful and caring girl, who shares a deep bond between her master and Atem.

Mana's design is based on "Dark Magician Girl". Her standard outfit consists of a beige shoulderless, sleeveless top with ruffled straps around her upper arm, a beige miniskirt, charmed bracelets around her wrists and ankles and matching necklace, belt and headwear. The character is slender and her brown hair is sporadically arranged and juts downwards in all directions.

Mana is a young magician in training at the Dawn of the Duel arc's beginning who serves the priest Mahad. After Mahad's death, she swears to become a great magician and eventually is able to summon her own Ka, the "Dark Magician Girl". Later (in the anime) when Yugi's gang discovers her, Yugi explains about the card game back home commenting on her reference to Dark Magician Girl. Mana later helps them to defeat Zorc. She is one of the only two people in the Millennium world who could see Yugi and his friends. Mana participated in the final battle against Zorc Necrophades when the latter initiated his assault on the palace. Her ka and Mahad attempted to destroy Zorc with a combined attack but Zorc was unaffected and easily wiped them out. Since her ka was destroyed, Mana fell unconscious. Fortunately, Atem regained his true name and destroyed Zorc

After Zorc's destruction, Mana saw Atem and his friends returned to the modern world and waved them goodbye. Sometime afterwards, she died and her soul was among others waiting for Atem as he passed into the afterlife. 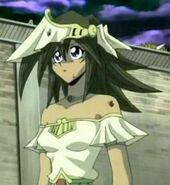 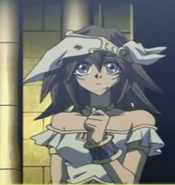