Patty McCabe
Originally born in Zambesi Village, M'Changa Province, Africa, an infant girl with no name was unknowingly witness to the destruction of her home by a local warlord's army. Her father tried to protect it but was shot dead. Her mother fled Zambesi with her and the Tantu Totem, leaving her older sister Kuasa behind. Somehow, the infant and a strange necklace was taken in by a foster agency in Detroit. She was placed with Chuck and Patty McCabe. They named her Mari. Chuck looked into the necklace and learned it was called an Anansi Totem. Chuck and Patty decided to give it to Mari when she was old enough. They raised Mari unaware her biological mother and father were killed by local greed, corruption, and wanton violence. One day, when she was 10, Mari told Patty about several girls at school who said her mother was a junkie and that's why she was given up. Patty comforted her and told the story of when Mari came into their lives. She took a small chest from a kitchen cabinet and took out the totem. She told Mari it was her mother's. It was an "Anansi Totem" and it might help her find the answers to her many questions.

Years later, as an adult, McCabe left Michigan in search of answers about her family and heritage but found out nothing. She spent some time in Central City and quickly accepted crazy was the new normal. After being gone for four years, she returned to Detroit for a job interview in the fashion industry for a design position. On the night of December 11, 2013, McCabe had an iceberg shake at a Big Belly Burger and used her credit card. McCabe's would be employer thought her sketches lacked "identity" but still offered a job in exchange for a sexual favor. McCabe responded by stabbing him the hand with a pen. She was arrested. To her surprise, McCabe's bail was posted by one of her former foster fathers, Chuck. Chuck offered to buy her a meal. After McCabe explained what led to her arrest, Chuck admitted his late wife, Patty, probably would have been proud of her for standing up for herself. McCabe in turn didn't think it was the same without being chewed out by Patty. Both admitted to missing her. While walking, they were held up by three hoodlums who wanted the Tantu Totem around her neck. Instead of complying, she drew on the power of the totem and broke free with the power of a gorilla and tossed the hood. She kicked the second hood then pounced on the third. Kuasa, who hired the hoods, realized her presence activated the totem.

Chuck came to and saw only Mari McCabe was still standing. They relocated to his home. McCabe took a coffee while Chuck went to get some sleep. He offered her to stay. Her old bedroom was still how she left it. She went upstairs and saw her photo frames. McCabe remembered the day Patty gave her the totem. The next day, she went to a university and met with a Professor Macalester for his expertise on the totem. However, she knew most of what Macalester revealed then admitted she wanted to find out about her family. As she left, Macalester added the myth of the totem also said it granted its wearers the ability to tap into the life force of the animal kindgom and borrow their abilities. After she left, Macalester reported to one of his benefactors - who wanted the totem and hired the three hoodlums earlier. She agreed to fully fund his next expedition for the totem but wanted McCabe alive. Back at Chuck's home, McCabe tried to share her idea that the totem was magical but he didn't believe her. McCabe demonstrated the strength of an elephant and lifted the kitchen table with one hand then did some wall crawling outside. She summoned the eagle but didn't go through with jumping off the roof and using the power of flight.

The attempted mugging drew more attention than McCabe knew. Cisco Ramon's modified facial recognition algorithm flagged McCabe as a possible metahuman. Thinking a metahuman outside Central City could be something more, Flash recruited Arrow to come with him to Detroit. Three days after being arrested, McCabe was chased across building rooftops by Arrow and Flash. She utilized the Tantu Totem to dodge all their attempts to neutralize her. However, while she was trying to avoid a net arrow, McCabe slid off the edge of a building. She took on the power of flight and soared up into the sky. Arrow convinced her they only wanted to talk. McCabe denied being in Central City during the S.T.A.R. Labs particle accelerator explosion. Felicity Smoak verified her whereabouts in Detroit. McCabe noted her powers were derived from magic then insisted she wasn't any business of theirs. She turned down Flash's offer to help and warned them to stay away from her father's house or she would disembowel them with the power of a lion. McCabe flew away.

McCabe returned to Macalester's office and quickly explained two men were after her and she needed his help to answer her questions. She demonstrated camouflage to Macalester who apologized to her. Kuasa and two armed men forced their way into the office and demanded the totem. If McCabe refused, Kuasa would have one of the armed men kill her. McCabe was more than happy to give it over in exchange for learning where it came from. However, she learned it bonded to her. Kuasa declared it would be removed from her corpse but McCabe utilized camouflage and tried to sneak out the window. Kuasa sighted her. Her men shot McCabe in the arm as she tried to leap to another building. On Kuasa's orders, McCabe was taken with her to Zambesi. When McCabe came to, Kuasa revealed to her they were sisters and told her the history of Zambesi. Unwilling to die to give up the totem, McCabe tried to run but was recaptured. Kuasa brought out a spider, considered the true form of Anansi, and had it bite McCabe.

She summoned the power of a rhino and knocked Kuasa's men away. McCabe tried to run away but after nightfall, she collapsed from the effects of the spider bite. Kuasa removed the totem from her in triumph. Animal Spirits gathered around McCabe and woke her up. They declared it was not her time yet and she needed to stop "the pretender." They revealed that was the reason her mother left Zambesi - to create distance from Kuasa. The spirits implored McCabe to embrace her true calling and they would stand with her. Some took the forms of Patty, her biological parents, and biological grandmother. McCabe returned to the village and confronted Kuasa. Kuasa was undaunted when the spirits took down her followers. McCabe threw a stick at Kuasa and wounded her on the arm. Kuasa's elephant form struck McCabe and knocked her into a table. On the sly, she grabbed the spider from one of the pots tossed over. When Kuasa got in close and bit her shoulder, McCabe slapped the spider onto her arm wound.

The spider's poison spread faster being exposed directly to the bloodstream and Kuasa could no longer use the Totem. Kuasa stammered the totem was belonged to her. McCabe corrected her and stated the totem belonged to their family. Kuasa refused to admit it was over. McCabe decked her with an uppercut then removed the totem. She returned to Detroit and fashioned herself a costume to protect her adopted city from crime. McCabe explained her plans to Chuck which he summarized as 'fashion designer by day and taking out muggers by night.' McCabe stated she and the Totem would protect her 'village,' Detroit. She admitted to not saying a lot of things before then told Chuck she loved him. Chuck replied the same and they hugged. The totem glowed, warning McCabe of others outside. She took to the roof and addressed Arrow and Flash.

Arrow thought it was foolish of her to fight crime without proper training. She managed to convince them to give her a chance to figure things out on her own for awhile. Flash told her she could always call on them for help. McCabe thought she was getting a 'cool name' or something. Flash recalled Cisco called her "Vixen" then went on a tangent denying he was affiliated to anyone named Cisco. Arrow warned her 'the life' wasn't easy but she was confident she could handle it. McCabe declared she knew who she was. Arrow understood and took his leave. McCabe looked up to the sky and stated she was Vixen. 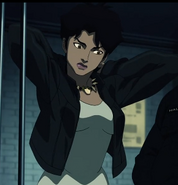 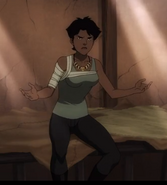 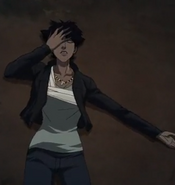 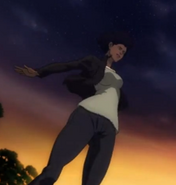 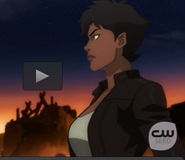 Add a photo to this gallery
Retrieved from "https://xianb.fandom.com/wiki/Mari_McCabe(Vixen)?oldid=341243"
Community content is available under CC-BY-SA unless otherwise noted.