Shield
Maria Hill is an agent of S.H.I.E.L.D. When Nick Fury went missing, she took over as the acting director.

Her early life is largely unknown but it is mentioned that she had joined the military before being recruited to S.H.I.E.L.D. by Director Nick Fury, where she serves as his trusted lieutenant and acting director.

When Iron Man had boarded the Helicarrier arguing with Fury, she raised her gun on his armored head, stating that he's under arrest as all agents were pointing their weapons on him. But Fury had ordered her and the others to stand down despite her protests.

After their argument, they went to The Vault as they escort the HYDRA agents there to their respective cells. Fury had asked her to tell him everything about The Raft and its inmates.

During an interrogation with Baron Strucker, they were interrupted by Grim Reaper's infiltration to free the leader of HYDRA. Fury and Hill had opened fire on Reaper but the latter took her out and took her pass key before knocking out Fury and freeing Strucker.

After when Strucker fell off from the getaway car, he was again captured by Hill and other agents, while Fury battles and defeats Grim Reaper.

As Grim Reaper had been locked up in his new cell, she asked Fury if the three supervillain prisons were all different, but when Fury answered with the term four. After he left, she thought that they're only three.

Inside the S.H.I.E.L.D. Helicarrier, Maria Hill had a conversation with Wasp about the offer to join S.H.I.E.L.D. that she's ready to join but mentioned that Ant Man was against it. When they pass by Black Widow, Wasp had asked her who is she but Hill didn't answer saying that it's classified, making Wasp to reject the offer as everyone in S.H.I.E.L.D. was being so serious and secretive. Then the lights go off and the Breakout happened.

When all of the supervillains escaped, Hill and Wasp had fought their way to save Hank from other villains inside the ruined Big House. After saving Hank, Hill then proceeded to the main brig as she reported to Fury about the situation. But when Fury said that their new priority is The Raft, with Hill saying, the fourth prison.

When Fury and his elite agents proceeded to The Raft by helicopter, he put her as acting director and told her to save who she can and contain any escapees while he update her on The Raft. When Hill asked him if the fourth prison's super-villains were free, Fury answered that she should enjoy being director while she still can.

After the Breakout, Hill was with Fury who told everyone to stand down as they prepare to recapture Hulk, and mentioned that all supervillains had escaped. Maria also witnessed the five heroes' defiance to work for S.H.I.E.L.D. and decided to form their independent team called the Avengers.

When HYDRA and A.I.M. fought each other over the Cosmic Cube, forcing the Avengers to intervene aided by Black Widow. The Avengers were surprised that Maria Hill had assumed command of S.H.I.E.L.D. after Fury had gone missing without a trace. She even ordered the agents to attack them, forcing the other Avengers to defend themselves. Even after the Avengers took down HYDRA and A.I.M., she threatened them that she'll go to the president and congress to instate a superhuman registration act which prompts all superheroes to join S.H.I.E.L.D. whether they liked it or not.

As Ultron proclaimed his imperative to the world and hacked all of the world's defense and weapons systems, including the Helicarrier, Hill was among them listening to him. When Ultron raided the Helicarrier, he took out all S.H.I.E.L.D. agents and personnel, leaving Hill behind.

When Ultron approaches her after taking out her gun, he revealed her real name, Maria Christina Hill, and mentioned about the missile codes within her mind. She tried to resist him but was easily overpowered. Ultron has begun scanning her mind which hurts her, but was interrupted by Wasp, Iron Man, and Hulk who immediately fought him with everything they got. Then again, Ultron had overpowered them and launched all nuclear missiles to destroy all life on Earth.

They were about to be defeated until Thor, Black Panther, and Hawkeye had come to aid them after finishing off Ultron-controlled armors. Together, they defeated Ultron with everything they got.

After Ultron's defeat, Hill had ruined a victory celebration stating that Hank should be punished for creating the robot that nearly destroyed life on Earth, which saddens Hank as he left.

Hill visited Stark Tower attempting to convince Stark to accept the registration act and be the first one to join it, but the latter refused, which makes her threaten him that S.H.I.E.L.D. will come after all heroes if they don't join. But when AIM attacked Stark Tower, she have to help Stark, Rhodey in his War Machine armor and the other Avengers to defend the building and stop Technovore.

After the battle, she returned to her bad mood again, still warning him about the same thing she mentioned earlier, which Stark refused to listen.

At some point she swapped herself with a life model decoy. When the Skrulls invaded the Helicarrier crashed (again) and she went to find Fury. She arrived to find that Iron Man was dying after she bested the Skrull queen, who escaped. She successfully managed to restore power to Iron Man's arc reactor (even if the last wire was dumb luck) and he flew off to Washington to get rid of the Skrulls. She remained in command of S.H.I.E.L.D. for a while as Fury was finishing up his Skrull hunt.

She wears a very form-fitting dark-blue standard S.H.I.E.L.D. agent uniform and has a short brown hair and eyes, ripped broad shoulders, and wears red lipstick. She also has a very voluptuous yet well-toned lightly muscular figure for her great body and it is shown to be very well-endowed.

Her attitude over heroes has shown to be rather negative at best. She has a strong dislike towards Iron Man that is shown when she tried to arrest him aboard the S.H.I.E.L.D helicarrier even after he saved the United Nations from being attacked by HYDRA. After Fury's disappearance and Hill became acting director of S.H.I.E.LD she seemed more focused on forcing the Avengers to join S.H.I.E.L.D. rather then the fact that A.I.M. and HYDRA were currently attacking New York fighting over the Cosmic Cube. She is even willing to ask the President of the United States to create the Super-Human Registration Act in order for all of heroes will join S.H.I.E.L.D. whether they liked it or not. She is headstrong and stubborn, but also a little inexperienced. Also, she is also an arrogant control freak. Her personality is practically the same as her comic book incarnation.

She has no powers of her own but she has extensive military training in handling weapons and in martial arts. She's able to hold on her own in battle.

She wields a laser pistol and other S.H.I.E.L.D. weapons and gear.

Background in other media 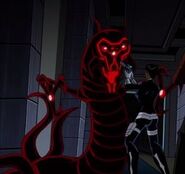 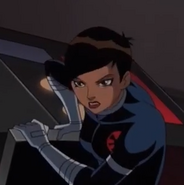 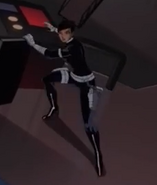