Start a Wiki
Marina (Japanese: ツバキ Tsubaki) is a character of the day in the Pokémon anime who appeared in Bye Bye Psyduck.

Marina lives in the Orange Islands. She, like Misty, is a Water-type Pokémon Trainer, and the two of them became fast friends. When they met, Misty's Psyduck had a bright pink tail. Marina said that meant the Pokémon was going to evolve soon, which excited Misty. Realizing their shared enthusiasm for Water Pokémon, the two decided to have a battle to determine who was the best Water Pokémon Trainer.

In the subsequent battle, Misty's Goldeen lost to Marina's Tentacruel, but her Staryu evened the odds. Marina then used her Psyduck, which proved to be much more powerful than Misty's, as it did not need a headache to unleash its Psychic powers.

With Staryu having fainted, Misty decided to use Psyduck, hoping it would evolve. Ash accidentally tossed her backpack into the water, and when she pulled it out, a Golduck came out.

Thinking her Psyduck had evolved, Misty battled with Marina and ended up winning, Golduck defeating Marina's Starmie (the battle with the Psyduck was interrupted by Team Rocket). It was at this point Misty realized that her Psyduck did not evolve. The Golduck she was using was just trying to impress her. Marina then realized the information she told Misty about Psyduck evolving wasn't true. Although Marina assured Misty that this demonstrated her superior skill as a Trainer, she won using an evolved wild Pokémon without even catching it. Ash also pointed out that technically Misty's final battle couldn't count as she won using a Pokémon that wasn't hers. 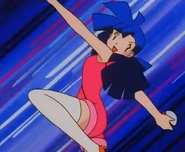 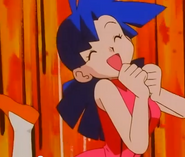 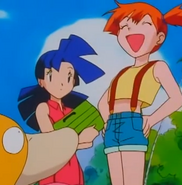 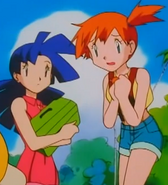 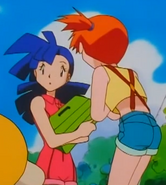 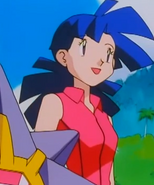 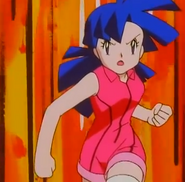 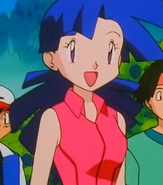 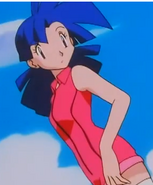 Add a photo to this gallery
Retrieved from "https://xianb.fandom.com/wiki/Marina?oldid=219603"
Community content is available under CC-BY-SA unless otherwise noted.