Xianb Wiki
Register
Don't have an account?
Sign In
Advertisement
in: Reporter, Damsel in Distress, Red Hair,
and 20 more

Carnage Queen
Mary Jane Watson was one of Peter Parker's first friends since they were kids.

She's studying journalism at Midtown High and wants to work for the Daily Bugle. This led her to try to make an interview with Spider-Man, after knowing that he attend Midtown.[1]

The Frightful Four attacked the school, trying to get his side of the story.[2]

Peter Parker sees Sam Alexander aka, Nova at "his" table with Harry and Mary Jane. He forces Sam to go to talk in the hallway, where Peter discuss with him about having his Peter Parker life separated from Spider-Man's. When they're about to fight, Coulson sends them to detention.[3]

When Venom attacked Harry Osborn's penthouse in search of Spider-Man, MJ used a fire escape to get to the rooftop of the building so she could cover the story seeing it as her ticket to get the job at the Daily Bugle. She saved Harry from falling to his death and after battle finished she helped him cleaning the mess from the party and when Peter shows up she give him some time alone with Harry.[4]

Why I Hate The Gym

Taskmaster infiltrates Midtown High as the new Gym teacher forcing the students including Mary Jane to take part in a obstacle course to learn the identity of Spider-Man.[5]

Spidey finally agreed to an interview with MJ luckily they accidently got into a fight between the Hulk and Zzzax which could prove that Spider-Man is not a Public Menace.[6]

While Wolverine trapped in Peter's body storms out of class, he is confused about everything, even flirting with Mary Jane Watson and causing her and Harry to laugh[7]

For Your Eye Only

Peter has lunch with Mary Jane and Harry, before rushing off to a training session with Fury.[8]

The Beetle planned to take Jameson before the released of his expose. Mary Jane Watson calls Peter to inform him she has a job interview with Jameson. They told him to stop her but Peter explained that she is the most stubborn people he knows. They form a plan to keep her away from Jameson, using Peter as a distraction, but it did not work. The team try to stop her from entering but she talks her way by them. A beetle drone knocks out Power Man and Iron Fist. Nova in the elevator tries to stop her but is tricked as well, only to have been knocked out by a Beetle drone. In the elevator the cable is cut and they go hurtling down, but it was only White Tiger try to keep Mary Jane safe, only to be taken out by the Beetle. Mary Jane decides to take the stairs instead, which to Peter's annoyance consisted of thirty flights. At the office they meet with Jameson's but Peter can not reach any of the others on his communicator. Peter's spider-sense goes office and he rushes her to Jameson's office, so he can change into Spider-Man. Spider-Man is attacked by a swarm of Beetle drones as the beetle attacks him from the elevator. Mary Jane had her interview as Spider-Man battled the Beetle outside. Using missiles the Beetles destroys the reception area. Using his webbing he flings him out the window only to be dragged behind as the Beetle used his jet pack. Spider-Man is knocked back into the building and the Beetle planned to blast Jameson's door, but the team arrive just in time to help. When he reaches Jameson's office he only finds Jameson on the Television screen, reporting from a secret location. The team take the Beetle away, while Spider-Man changes back into Peter.

Principal Coulson had established Mary Jane's play on where Trapster mistakes Flash Thompson as Spider-Man during a museum robbery. Trapster attacks Flash on opening night causing Peter Parker to don a duplicate Spider-Man costume in order to fight Trapster. This fight is brought to the stage in the midst of the Spider-Man play. Agent Coulson had to play along to keep the audience from going into a panic. It soon get to the part where this episode comes in where Trapster grabs Mary Jane. Mary Jane breaks free as Trapster continues the fight Spider-Man. Spider-Man flings Trapster through the wall and traps Trapster with his own Paste-Gun. Flash later told the audience that Peter saved the night from an actual attack from Trapster. When Flash starts singing, Trapster begs Peter to take him to jail so that he wouldn't put up with Flash's singing.

The team invite everyone from Midtown high to a part at Peter Parker's House. But S.H.I.E.L.D. has made modifications causing the house security system to attack them. Flash, Mary Jane wait outside the sealed house, believing that Peter is ignoring them.

Mary Jane is confused by Peter's behaviour, not knowing he had switched bodies with the Hulk.

MJ, Peter and Harry stay after school to catch up in chemistry. But they end up battling the Lizard with the help of Stan the Janitor. Working together they rescue Principal Coulson who had been kidnapped by the Lizard 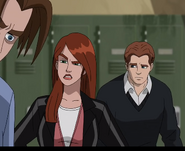 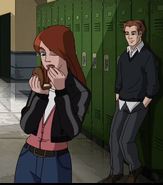 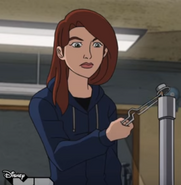 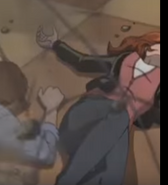 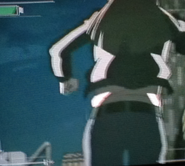 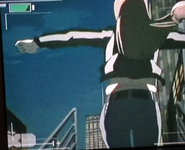 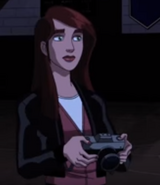 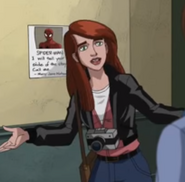 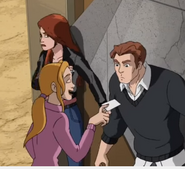