Mary Test is one of the two tritagonists of Johnny Test. She is the eldest of the two twins. (Susan)

Mary is a super genius and the older twin sister of Susan and also the older sister of Johnny. Mary has been shown to be more empathetic and sympathetic than her sister. Like her sister, Mary harbors a deep love bordering on obsession for the Test's next-door neighbor Gil Nexdor. Like her sister, she attends school at the Porkbelly Institute of Technology (a.k.a "Porkbelly Tech" for short). Mary is prone to believing in the less scientific and more science-fictional, which, although it receives scorn from her twin, often proves to be correct in the end. Mary seems to be more level-headed than her twin Susan, and Mary tends to be more conservative, as she speaks her mind much less than Susan. Though Mary wears pants, she seems to be more "girly" than her twin Susan. This is revealed when she decides to make a normal dress in the episode Princess Johnny. Mary is the older twin of the two. Her age appearance appears to be somewhere around fifteen years old. Susan and Mary test are very smart. They are smarter than Bling Bling Boy and Mr. Black and Mr. White, but one thing for sure: they don’t know how to get Gil's love. Susan and Mary Test would both like to be Gil's girlfriend, which often gets them into tied fights, which often proves her brother's intelligence of knowing that she and her sister can't both have Gil as a boyfriend.

Mary has a light yellow t-shirt with a blue moon on it, long curly red hair, and a moon-shaped barrette. When she is seen without her glasses in Downhill Johnny, her eyes appear as green dots. But in Johnny's Got a Wart!, her eyes are like everyone else's. Her eye color is the same as her mother, Lila's. She often wears baggy blue jeans and light olive green sneakers with the shape of an ivory-colored crescent moon and a white lab coat. Her bathing suit is a pink two piece bikini , and her disco outfit is a purple tank top that reveals her midriff and navel, with magenta shorts and silver boots. She also has outfits suited for certain controlled experiments, such as a high-tech diving suit, and a skin-tight yellow hazmat suit. Both suits have her trademark moon on the side. When handling bio hazardous materials, usually while performing surgeries, she dons a surgical mask and a pair of cyan-blue latex gloves.

In Season 1, Mary was protrayed by Brittney Wilson. During Seasons 2-4, the role was taken over by Ashleigh Ball. Wilson returned to the role in Season 5. In Season 6, Ball later returned to voice Mary again. 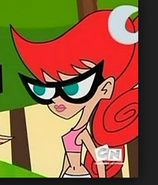