Max
She is a Pokemon Coordinator.

When May debuted in the anime, she did not like Pokémon at all and was only interested in becoming a Pokémon Trainer so she could travel. Everyone expected her to follow in her father Norman's footsteps. However, after seeing a Pokémon Contest in All Things Bright and Beautifly!, she decided to become aPokémon Coordinator. Since she initially knew almost nothing about Pokémon or attacks, Ash assumed the role of her mentor. She gradually gained experience through her journey and practice with Ash.

As a Coordinator, May was able to learn more about Pokémon and form stronger bonds with them. InCome What May!, after winning the Fallarbor Contest, May told her Beautifly that she loved it. This is an example of her growth - from someone who initially disliked Pokémon to someone who cared deeply for them.

With her Pokémon, May was able to come up with different attack combinations to use during herContest Battles. For instance, she would use her Combusken's Fire Spin and her Squirtle's Bubble to create a combination of fire and water, dubbed "Fire and Water Whirlwind" by Lilian, after witnessing Tucker use it against Ash with a combination of Water Pulse and Fire Blast. This even got a rival of hers mad, thinking she thought he was not worthy of the move so May did not use it against him.

She also developed a love for making her own Pokéblocks with recipes that she thought up, including ones called "May's Purple Surprise" and "May's Pink Surprise" (Japanese: Haruka's Delicious and Haruka's Delicious 2). Unfortunately, the only ones who liked her "Purple Surprise" were herMunchlax and Jessie. Her "Pink Surprise" came from the recipe Professor Oak uses to make Ash's Snorlax's food. Thus, after May first fed it to her Munchlax, it was automatically made full. This Pokéblock was regularly used to feed Munchlax in order to prevent it from eating the food of others.

During her journey, she found a rival in Drew, a skilled and sometimes arrogant Coordinator. Drew became one of her main inspirations to try harder to sharpen her coordinating skills. At first, Drew had claimed that May had "no style" as a Coordinator, but by the end of May's second Contest campaign, when she beat him in the Kanto Grand Festival, he recognized her growth and skill. Another rival of hers, Harley, is a flamboyant man who goes to extremes to beat May. And example of Harley's depravity was seen in A Cacturne for the Worse, when he recorded Max telling him a story from May's childhood. May had been wearing a blue swimming cap in the ocean, and her mother had mistaken her for aTentacool from afar and attempted to catch May with one of her Poké Balls. Harley played the recording of this story during the Izabe Island Pokémon Contest to embarrass May into losing. May was able to beat Harley in the end, but she claimed that she had never been more humiliated. Another example is when Harley joined forces with Team Rocket in an attempt to sabotage May's performance with Combusken, which ironically ended up contributing to a more dazzling appeal.

At the Kanto Grand Festival, May also competed against Solidad, an experienced Coordinator to whom she lost to in the semifinals. At the end of the Advanced Generation series, she left to compete with Drew, Harley, and Solidad in the Johto region, aiming to find her own battling style. The decision to stop traveling with Ash was an important one for May's character. Because Ash played the role of a mentor to her through most of the series, she was largely influenced by his offensive battle style. By the end of their journey through Kanto, May had realized that an offensive style was not necessarily the best for her and for Contests. Her constant use of dazzling attacks ultimately proved to be her downfall at the Kanto Grand Festival, when Solidad was able to recognize and counter these moves by leading May to attack and then successfully dodging. Her goal to find her own style was therefore also a goal to improve her Contest Battle skills and ultimately become a Top Coordinator.

May has Contest Passes to compete in Hoenn, Kanto and Johto. She also has a personal theme song, I Won't Lose! ~Haruka's Theme~, performed by KAORI. It was first used as background music in Curbing the Crimson Tide and was used multiple times after that during May's Contest performances and battles. The song became the ending theme of the show between Pokémon Ranger - Deoxys' Crisis! (Part 2) and Home is Where the Start Is!.

This listing is of the Ribbons May has obtained in the Hoenn region: 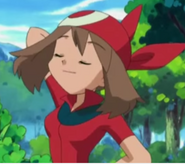 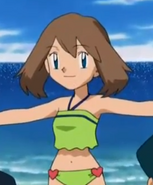 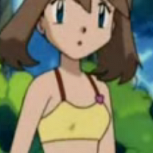