Head Of The Fareed Family

McGillis Fareed (マクギリス・ファリド Makugirisu Fyarido?)is a character that appears in the Mobile Suit Gundam IRON-BLOODED ORPHANS television series. He is a young officer from Earth who works for Gjallarhorn.[1] By the middle of the first season, he uses the alias Montag (モンターグ Montāgu?)and presents himself as a representative of the Montag Company, and assisted Tekkadan in bringing Kudelia to Earth to expose the disorder within Gjallarhorn.

McGillis Fareed is polite, courteous, and can be considered even charming, but he can be very serious about his work, which makes him seem cold-hearted to those who don't know him personally. He is analytical and thoughtful, and usually more reserved and serious than his friend Gaelio Bauduin, but he will have an occasional cheeky smile and does have a sense of humor. But underneath his professional facade lies a man riddled with extreme anger. The root cause of his anger is unknown, but presumably it is related to his motivation to reform Gjallarhorn. He also seems to care about people he knows. McGillis isn't the type of person to just accept things as they are and believe what everyone says; he is known to be very fastidious and will get down to the truth using what he's got. He has a habit of picking the strand of hair that hangs in front of his face and toying with it in his right hand when he is calculating or thinking critically. He also shows a soft spot for children such as Biscuit's sisters and his fiancee, Almiria.

He is among the few members of Gjallarhorn who is aware of the organization's deterioration due to ongoing corruption among members. He wishes to reform the organization so as to get rid of the corruption. To do so, he begins to don a wig and a mask to hide his identity and seeks Tekkadan's help, supplying them with weaponry using his connection to the Montag Company. He is willing to do anything in order to reach his goals even if it mean manipulating and betraying those who he once considered friends, showing a ruthless streak. But despite this, he does feel some genuine remorse for his actions particularly betraying Gaelio.

McGillis is a very skilled mobile suit pilot and a highly intelligent audit officer. As an inspector, he can piece together clues that perhaps no one else could, such as how he knew Kudelia Aina Bernstein was still on the Tekkadan ship Isaribi​​ based off of the fact that Todo Mirconen was kicked off the ship and sent to to their cruiser (Episode 6). ​According to Gaelio, McGillis is very fast and good at his job, and if his subordinates are made to work at his pace, "their bodies can't keep up". McGillis is an excellent senior officer according to Gaelio. McGillis has proven to be a very charismatic speaker and skilled manipulator, deceiving Gaelio into installing Ein with the Alaya-Vijnana System and authorizing Carta to pursue Tekkadan, exploiting her rigid honorable personality.

McGillis, together with Gaelio Bauduin, were sent to Mars to inspect the Gjallarhorn's branch there. During the inspection, the duo noticed that a company sent out days ago did not return. Coral, the commanding officer of the Mars branch, came up with an excuse to throw them off and tried bribing them but McGillis would have none of it. McGillis and Gaelio then landed on Mars and arrived at a location where a battle was reported a few days ago. By piecing together what information he had, McGillis figured out that Coral had sent the missing company to capture Kudelia in order to get into the Regulatory Bureau's good grace and pass the inspection. Afterwards, they came across a cornfield, and nearly crashed into Cookie Griffon and Cracker Griffon. This created a ruckus, and prompted Mikazuki Augus to strangle Gaelio. McGillis subsequently apologized and gave the twins chocolates.

Later on, he dons a mask with a wig on it, becoming Montag and appearing in front of Kudelia Aina Bernsteinand Fumitan Admoss to convince them to leave Dort 3, and informing them it was Nobliss Gordon who sent the weapons for the workers' coup d'état via Tekkadan. He also revealed that Fumitan is an agent of Nobliss.

As Tekkadan tried to enter Earth's atmosphere, McGillis sorties in his V08-1228 Grimgerde and helps Mikazuki and his ASW-G-08 Gundam Barbatos in defeating Carta Issue's Squadron that was guarding Earth's orbit. Later on, as McGillis Fareed, he manipulates Carta by giving her the information and whereabouts of Tekkadan, who was headed to Edmonton, escorting Togonosuke Makanai. The battle led to Carta's death. Eventually, he intervened in the battle between Mikazuki's Barbatos and Gaelio's Kimaris Trooper. McGillis reveals his plan to Gaelio, which prompted the latter to lash out after finding out that they were used. He then presumably killed Gaelio by stabbing the Kimaris' chest with the Grimgerde's sword.

Upon realizing that Tekkadan can fit into his plan of exposing Gjallarhorn's inner corruption and disorder, and eventually the reformation of the organization, McGillis used his alias as Montag, the representative of Montag Company, to provide them with various kinds of support. However, his act of sending Carta to stop them from reaching Edmonton is somewhat dubious either as an act of betraying them or simply just to have Carta killed. 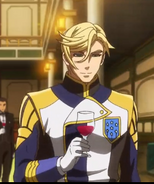