Medusa is an Inhuman and resident of Attilan.

Medusa possesses the normal strength of a female Inhuman of her age, height, and weight who engages in moderate regular exercise, Due to generations of eugenics, Inhumans are superior to humans in strength, reaction time, stamina, resistance to injury, and speed. Her hair can support more than 1 ton. 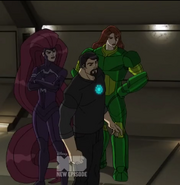 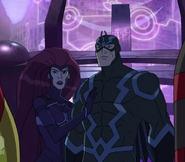