Lois Griffin
Megan, aka Megatron "Meg" Griffin is the oldest child of Lois and Peter Griffin, and the sister of Chris and Stewie Griffin. She is currently attending James Woods Regional High School. Meg explains in "A Fistful of Meg" that her father changed her birth certificate to "Megatron" after her mother had already selected Megan. Despite this, she is still commonly called Megan such as by Mr. Berler in "Let's Go to the Hop".

Meg desperately tries to be part of the cool crowd, and is coldly rebuffed. Eager for acceptance, she is shown in two stories unwittingly recruited by a religious cult, and accepting a mistaken invitation to join her school's Lesbian Alliance. It has also been shown that when she actually gets into a dating position, she forms a mentally unstable grasp onto that person. She will also go to great lengths such as kidnapping, forcing sex, and living in denial of break-ups or other activities. She will also try desperately to get sex in some cases; for example in "Untitled Griffin Family History", she asked a group of robbers breaking into the house to rape her, much to their disgust, to the point where they charged her with sexual harassment and got her arrested. However, in some episodes Meg is depicted with her friends in a slumber party, and gossiping about boys; in later episodes these girls are characterized as dateless losers like Meg.

Meg is a very unpopular student in high school. However, she is sought by pimply nerd Neil Goldman, and perverted neighbor Quagmire has shown an interest, mostly due to his very broad standards. Despite her unpopularity, in several episodes she is shown dating and participating in sex. She loses her virginity on live television to Saturday Night Live host Jimmy Fallon after having a drastic make over. She believed herself to be pregnant with Michael Milano and Jerome also claims to have had sex with her.

Early in the series she had a crush on Kevin Swanson, who seemed to enjoy her company. In "Da Boom" he asked her to Quagmire's New Year's party, in "Holy Crap" he was mentioned as holding her hand on the walk home from school.

In "From Method to Madness" she dates nudist Jeff Campbell. They become fast friends and start to date each other. At first, Peter and Lois discouraged Meg to date Jeff. They decide to make up by inviting him over while they were nude to help him feel more comfortable.

In "Brian Sings and Swings", she befriended by a girl named Sarah who Meg later discovers is a lesbian. Meg pretends to be a lesbian & Sarah's girlfriend as she enjoys being accepted by Sarah. However her mother knows Meg is only pretending to be one in order to be accepted. She eventually is forced to admit to Sarah that she is not a lesbian.

In other episodes she is portrayed as chronically incapable of finding a boyfriend. For her Junior Prom she accepts a pity date from Brian, the family dog in "Barely Legal". Brian ends up making out with her at this party, but only because he was highly inebriated, and most likely high, as Lois slipped a bit of weed into is jacket pocket. Meg then becomes infatuated with Brian, going so far as to abduct him in order to have sex with him after he rejects her, but she does not seem to be interested in Brian after this episode. To make up for the lack of boyfriends she made one up, in "Bill and Peter's Bogus Journey".

In "Peter's Daughter" Meg falls in love with a med-student named Michael Milano after coming out of a short coma caused by Peter. Meg soon then announces that she is pregnant by Michael and the two get engaged. After finding out that she isn't actually pregnant, Meg tells Michael the truth hoping that he'll stay; however, Michael leaves Meg at the altar.

In "Dial Meg for Murder", she's dating a prisoner named Luke. Luke later escapes, and Meg tries to hide him, but she gets caught and sent to prison too.

In "Go, Stewie, Go!" she dates a boy named Anthony, who is, to the surprise of everybody in Quahog, completely normal. However, Lois seduces him because she feels bad about her aging. A flashback showed Meg once dated a boy with no legs.

She is also shown to be attracted to Connie DiMico. In "Stew-Roids", she asks Connie whether she can think about her in the tub. In "Dial Meg for Murder", she tongue-kisses Connie after knocking her unconscious, although this act was more about dominance and humiliation than any form of romance.

She was engaged again in "Leggo My Meg-O" to Prince Faisal. At first she thought that his father had bought her to be his sex-slave only for him to reveal that she was bought for his son for marriage. When he romantically proposes she gladly accepted and before they could kiss, he is killed by Stewie.

In "Friends Without Benefits" Meg dates a guy named Kent Lastname only for her to discover that he is gay and attracted to Chris.

In "Valentine's Day in Quahog", Meg spends Valentine's Day with a guy named Toby who she met on the internet. After he knocks her out on their date, she awakes in a motel to find he has harvested one of her kidneys. Despite this, she held him to his original promise of a full day together. After having a wonderful date, Toby gives Meg back her kidney and she places her kidney in a jar on her shelf in her room.

This is a list of people Meg has dated in Family Guy.

Meg is often shown as emotionally fragile or disturbed, derived from desperation for love and attention. In "Untitled Griffin Family History", Meg is charged for forcing herself upon a group of would-be captors and grows violently obsessed with Brian after a drunken kiss at the Junior Prom in "Barely Legal". In the same episode, Meg threatens to commit suicide when nobody at school would be her date to the prom and she also tells her parents that she's going upstairs to eat a whole bag of peanuts. When her parents stare at her blankly, she cries, "I'm allergic to peanuts!" In "Road to the North Pole" she wishes for "softer voices" in her head.

Meg also speaks of habitually cutting herself and throwing up after meals. Meg's dangerous behavior, however obvious, is rarely noticed by her parents even when stated. Such as in "Sibling Rivalry" after Lois had her fat removed she states to Meg, that eating to solve ones problems is the wrong thing to do, apparently referencing that she's somewhat fat, while complimenting Chris' hat despite him being the one who is overly obese. In this Meg replies, "I don't eat to solve my problems, I cut myself."

Peter also doesn't pay attention when she loses her temper and assaults a man who crashed into the back of the car while driving him, Cleveland, Joe and Quagmire around when they have been drinking in "Road to Rupert". He exclaims that her actions were "awesome" and this leads to her engaging in other erratic behavior to impress him. In "Dial Meg for Murder", Meg was desperate enough to date a criminal. Meg later stated no one cares about her while robbing Mort's Pharmacy and knocking Peter's teeth out and rapidly beating him. In "Go, Stewie, Go!", she rips out one of her teeth to prove that she is tougher than Lois. In "April in Quahog", it's alluded that she strangles stray cats and taught Chris how to poison squirrels during a family vacation mentioned in "Friends Without Benefits".

It is possible that Meg has a type of mental illness similar to Borderline Personality Disorder. Meg has exhibited behaviors that closely match the diagnostic criteria for BPD, as described by the Diagnostic and Statistical Manual of Mental Disorders:

A pervasive pattern of instability of interpersonal relationships, self-image, and affects, as well as marked impulsivity, beginning by early adulthood and present in a variety of contexts, as indicated by five (or more) of the following:

Meg's voice actress has not always been Mila Kunis. Cree Summer was the first choice to voice Meg, but Seth MacFarlane didn't like the idea of an African-American voicing her. When Seth made the original pilot, his sisterRachael MacFarlane provided her voice for Meg. When the series spawned off, Lacey Chabert was hired to do the role. However, she left after the show's first season, although some aired out of order and became season 2 episodes) and due to contract reasons, she could not be credited for her work. Since then, Mila Kunis has voiced Meg, though there have been some substitutes, like Debi Derryberry and Tara Strong, who voice her when she had a singing part. However, Kunis provided her own singing voice in "Road to the North Pole". At 47 years old in "Stu & Stewie's Excellent Adventure", after a sex change made her a man named Ron, she was voiced by John Viener. As such, Meg is the member of the Griffin Family who has been voiced by the largest assortment of voice actors/actresses. Chabert returned to voice Meg for one line in "Yug Ylimaf". 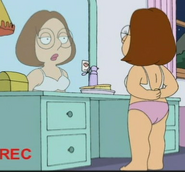 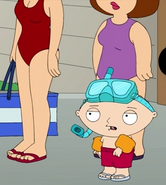 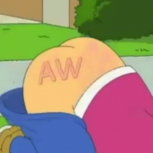 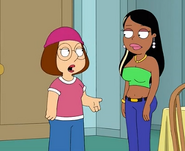 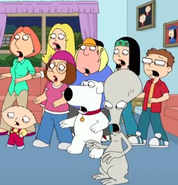 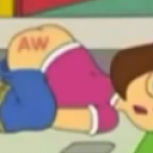 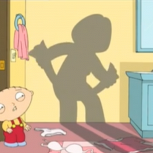 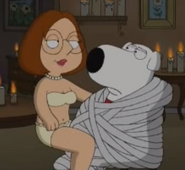 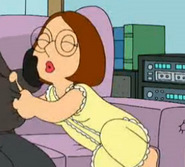 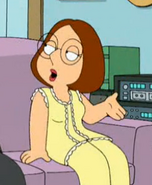 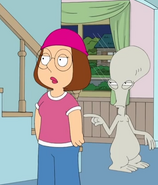