She is a Student at the DWMA.

A new 14-year-old meister to the DWMA. She is shy and ditzy but makes quick friends with Tsugumi and Anya. She decides to be Tsugumi's meister after their first meeting. 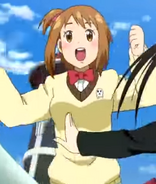 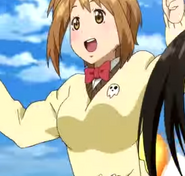 Add a photo to this gallery
Retrieved from "https://xianb.fandom.com/wiki/Meme_Tatane?oldid=210593"
Community content is available under CC-BY-SA unless otherwise noted.