In the 2003 TV series, Michelangelo is voiced by Wayne Grayson. Known as 'Mikey' to his brothers, his personality is more akin to the Mirage comics than the 1987 show. Still the comic relief, he often makes statements that spoof pop culture, although he uses less surfer slang than in the 1987 cartoon. His trademark nunchucku are once again his primary weapon, but he has used other weapons such as grappling hooks and those of his brothers. He is slightly more immature than in the Mirage comics-particularly apparent by a high-pitched scream. Unlike other incarnations, he was often more reluctant to fight and he likes to tease and annoy his older brothers, especially Raphael, for whom Michelangelo is the foil. In fact, a running gag is that whenever Michelangelo says or does something excessively outrageous and stupid, usually involving a catch-phrase from the 1987 show, one of his brothers (usually Raphael) will slap him on the head. Other characters such as Master Splinter and the Ancient One have picked up on this habit but usually whenever he disobeys. In the Fast Forward episode Time is Everything, when Michelangelo was talking too much, Splinter flipped over his seat he was sitting on causing him to fall on the ground, replying afterwards that "Somebody had to do it. It was… time."

Raphael and Michelangelo mostly have a love-hate relationship in which Michelangelo frequently antagonizes Raphael (it especially hurts Raphael's pride that Michelangelo has bested him more than once, both times because Raphael's anger got in the way), but Raphael shows that he cares about him whenever he's in danger. He also seems to be very close with Donatello, where the two are often paired together when Leonardo and Raphael are either arguing or training. Also, Mikey is often the one most enthusiastic about Donatello's newest finished invention, and would jump straight into "helping" Don with his first test run on it, though his "help" is not greatly appreciated by the latter and often generates more trouble. Donatello has also invented a hovercraft- a flying skateboard, at one point of time in Season 2 as means of keeping him quiet while Donatello himself worked. When Mikey was a kid, he and his brothers went with Master Splinter to Japan to bury Master Yoshi's ashes next to his beloved. While there they helped Master Splinter and the Ancient One win a fight against a ghost that was sent by the Foot Mystics to revive the Demon Shredder and that is when they gain their ninja masks. This happens in the episode (Fathers and Sons).

Michelangelo is also appointed to be "the one with the brightest fire" or with the most potential by The Ancient One. Master Splinter also claims a few times that Michelangelo obtains the most "raw talent" of all the brothers. Although, both Master Splinter and The Ancient One, say because of Michelangelo's lack of focus and interest in training, he will probably never meet his full potential. Michelangelo also claims many times in this series that he wishes not to be so serious and focused like his eldest brother, Leonardo. He also tells his other brothers to "chillax" and not be so serious all the time.

His agility and speed also play a bigger role than in the comics or other TV series and movies. It is shown in activities such as training runs, fights, and training, that Michelangelo clearly is the fastest of the four, in which is brothers are constantly having to catch up with him. It also plays a role in the 1st season when Michelangelo and Raphael are fighting, that Michelangelo keeps taunting Raphael, but because of his speed, Raphael cannot tackle him. This is shown more than once. His speed was the main reason he won The Battle Nexus, along with his ability to "get under people's skin" and taunt them. He is also portrayed as the best gymnast of the four. This is true partly because Master Splinter always sends him off to do backflips or extra training as punishment for goofing off or losing focus. Both of these abilities allow Michelangelo to taunt his opponents and beat them quickly without getting hurt by his opponent in the process.

Michelangelo is regularly treated as the 3d oldest brother and little is expected of him. However, he has shown innocent empathy for others as shown in particular by his adoption of Klunk the stray kitten, to whom he is very close and also by his relationship with Leatherhead. It is his initial awareness of Leatherhead's humanity which ends up forging the bond between the crocodile and the other Turtles. He enjoys Leatherhead's company, although he can tease him on occasion against his better judgment. However, he cares greatly for the crocodile and is quick and willing to forgive and reassure him when a rampaging Leatherhead injures him in a blind, nightmarish rage in the episode 'Hunted.' Leatherhead also appears to care greatly for Michelangelo and is distraught when he believes he has fatally injured him, but delighted to discover that his fears are unfounded when he finds out that the turtle is alive and well.

As in the Mirage comics, Michelangelo is an avid fan of comic book superheroes. In some episodes, he takes on the role of a costumed super hero called "Turtle Titan" and befriends other superheroes such as the "Silver Sentry" and the "Justice Force". As Turtle Titan, Michelangelo uses grappling hooks as both a weapon and a mode of transportation.

Although not shown as particularly focused on ninjutsu, preferring to spend his time reading comics or watching movies, he is quite an effective fighter and in the Season 2 finale, he became the Battle Nexus Champion, considered the best fighter in the multiverse. Although his victory was due in part to several very lucky breaks (with Raphael even referring to it as "sheer dumb luck, emphasis on the 'dumb' part), Michelangelo later won a rematch against the last finalist and earned a medal of honor for his behavior during the battle, with his ninjutsu prowess being spurred when the opponent revealed that he intended to kill Raphael, Leonardo and Donatello as well after killing Michelangelo in battle, prompting the latter to recall Leonardo's words on how if one of them went down, then all of them would go down as well.

In the crossover movie Turtles Forever, Mikey is the only Turtle who initially likes their comedic 1987 counterparts (he is especially fascinated by the initials on their belt buckles). However, he eventually gets tired of their laid-back attitudes and yells at them when they don't take the 2003 incarnation of Shredder seriously, proving even this version of Mikey has his limits to fooling around.

In early profiles of the 2003 animated series, Michelangelo is regarded as being both the most athletic of the four, and as possessing the single greatest potential in the martial arts out of the quartet, although unfocused on training mentally (though those are admittedly old profiles and may have been early plans for the character, he has certainly proven he is an effective fighter when need be) which prevents him from reaching his fullest potential. This profile statement has since been repeated in the profile of Michelangelo in the lead-up to the debut of the Fast Forward season which began airing on July 29, 2006.

It seems like we always end in these wacked out situations. I don't know, maybe its our karma. Like we did something bad in a past life. I mean really, really bad. Supervillain-holding-the-world-for-ransom-destroying-Tokyo kind of bad. Come to think of it, its probably Raph's fault. Everything bad that happens to us is because of something Raph did in a past life. Oh well, no use crying over past lives. I guess we just gotta accept things as they are. Just always be ready to kick some shell. Episode: What a Croc!

You know, I've watched a lot of sci-fi in my time, and I've always wanted to "boldly go where no Teenage MutantNinja Turtle has gone before," but I gotta tell ya, I didn't enjoy the trip. It felt like my shell got taken apart and put on backwards. And I can't say much for the locals because right off, they wanted to wax us, mostly because they were after this Fugitoid robot, our new friend and maybe our ticket home.

You see, he's really some egghead name Professor Honeycutt, whose mind is trapped in a robot's body. He invented thisteleportal device that can transport people across the galaxy or bombs, if you're the power hungry General Blanque, our other new friend. General Blanque wants that teleportal and he wants us dead or alive...well, he wants the Fugitoid alive, us I'm not so sure about. Episode: Turtles in Space - Part 2: "The Trouble with Triceratons

Ooh, ooh, I know, I know, We were trying to rescue Professor Honeycutt, we followed him into this Triceraton bunker, only it wasn't exactly a bunker, and it wasn't exactly full of air, and I'm not exactly sure how much longer we're gonna be alive! Episode: Turtles in Space - Part 3: The Big House

No, this isn't some kind of hi tech Bar Mitzva hand no, we haven't been taken over by the "Dome People" either. Its just your basic sneak and rescue and those blinking skull caps on our heads are the only thing keeping those robo guard dogs from going medieval all over us. The old guy with us, that's Stainless Steve Steel. Believe it or not, he used to be a superhero. We're helping him search for his missing teammates and I think we just found them. To think, this whole thing started out with me trying to find a comic book. And now I'm living one, although I'm not sure how much longer I'll be living. - "Return of the Justice Force" 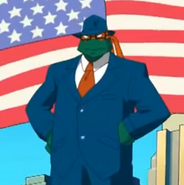