Michelangelo or Mikey is the "wild one" of the Teenage Mutant Ninja Turtles. Though he possesses a "child-like" innocence, he always brings his best game to a fight. He fights with two nunchaku, which convert into kusarigama.

Michelangelo is voiced by Greg Cipes.

Michelangelo is considered the most athletic and talented of his brothers. His nunchuks match his flexible abilities when it comes to battle. While he's not as disciplined as Leonardo, strong as Raphael, or as smart as Donatello, Michelangelo's raw talent, agility and sheer unpredictability make up for it.

In Follow the Leader while fighting Leonardo, he proves to be able to actually use moves from the capoeira fighting style. He also shows a lot of endurance. Splinter considers Michelangelo the one with the most potential of all of his three brothers combined, particularly complimenting his ability to fight without thinking (Although he cannot do this when actually asked to do so, panicking when Donatello asked him to confront the telepathic Doctor Victor Falco). Like his brothers, Michelangelo is stealthy, can hide in the shadows, sneak around without being detected, and can use hand-to-hand combat.

Despite his lack of intelligence, there are numerous of times where he is shown providing critical knowledge, such as when he and Raphael were looking for Casey and coming up with a solution saying they can use their T-Phones to get a feedback from Casey's T-Phone. He is also known to be very intelligent in Dimension X often providing help with his brothers and showing the ability to create Retro-Mutagen

Michelangelo is the youngest, shortest, and least mature of his brothers. Enthusiastic, positive and adaptable, Michelangelo is extremely creative and goes with the flow. He loves to joke around and pull pranks, especially with his brothers. He loves pop culture and readily accepts opportunities to widen his social group. As a brother and friend, Michelangelo is always openly playful and affectionate. While not very bright or book-smart, he can surprise others with his intuition, his keen sense of heart, and his quick graceful reflexes even in the absence of conscious thought.

Michelangelo has the capacity to be scatter-brained, naïve and excitable, which sometimes causes trouble for the team. However, his brothers are protective of him on occasion, especially his second oldest brother, Raphael. Though they find his idiocy rather irritating, they often freak out when he shows intelligence. Michelangelo sets a trend early in Season 1 of giving designated names to various mutated enemies, getting very upset if someone else names them before he can, this is evident when he finds out that Donatello named The Newtralizer.

During most of the series, Michelangelo wields a pair of Nunchaku with which, like his brothers with their chosen weapons, he is highly skilled. In some episodes he refers to them as 'chucks' - such as in Kraang Conspiracy he says "Okay, that was just gross, dudes. I have April Derp on my chucks." (April Derp had been reduced to black goo at this point).

In Pulverizer Returns, Splinter says that the boys are getting too reliant on their own weapons and makes them swap. After this process, Michelangelo is left with Leonardo's Katanas (which causes him to do an impersonation of his brother and make him believe he is the leader). During a fight, the Turtles become uncooperative with their new weapons and swap back. When Splinter finds out, he takes away all of the weapons, stating that any object can be useful for real ninjas. When he and his brothers are trying to saveTimothy, Michelangelo uses a chain and holds and fights with it in a style similar to his Nunchucks. Both of his Nunchucks can convert into Kusarigama. In Turtle Temper and The Gauntlet he also used a Yumi bow and like the rest of his brothers wields shurikens. In Target: April O'Neil, he briefly used a Kraang blaster that he picked up, and a plasma sword he stole from Chrome Dome, both of which he dropped after he almost hits his own brothers. 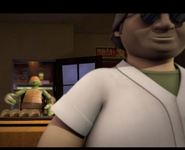 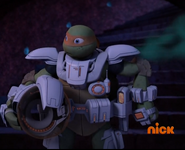