Mikasa Ackerman is the foster sister of Eren Yeager, and the main female protagonist of the series. She lived with the Yeager family for approximately a year before the fall of Wall Maria. Though she desires only to live a peaceful life with Eren and Armin Arlert, Mikasa chose to follow them both into the military, where she would become the best soldier among the 104th Trainees Squad, and later joined theSurvey Corps to follow Eren.

Mikasa appears for the first time in year 845 somewhere inside Wall Maria. She is seen waking Eren up, telling him that they need to return to home. She is surprised to see tears in his eyes and asks why he was crying.On their way home, they meet Hannes. Mikasa watches as Eren complains about the soldiers slacking off while on duty.Later, both Eren and Mikasa watch the return of the Survey Corps forces, witnessing yet another failure of their expedition. After returning home, Mikasa tells on Eren, revealing to his parents his desire to join the Survey Corps. Annoyed, Eren leaves, with Mikasa following him. They save Armin, who is being beaten by local bullies and together discuss their desire to go outside the Walls.

At that moment, the three kids witness the sudden appearance of a Colossal Titan that breaches the Wall's gate. Mikasa and Eren run back to their home to find it crushed and their mother trapped under the debris. In spite of their attempts, Mikasa and Eren are unable to free her, Hannes rescuing them as a Titan devours their mother. Mikasa and Eren are placed on a ship just as the Armored Titan breaks through the inner gate, letting the Titans inside Wall Maria, witnessing Eren's vow to kill all the Titans as they are transported to safety. Once inside the safety of Wall Rose, Eren confronts a soldier from the Garrison who manifests his annoyance for having to share their food with outsiders. The short beating the soldiers give Eren cause him to claim that he will retake Wall Maria with his own hands and insult Armin for his doubt, Mikasa punching him to bring him back to his senses. She then declares that she will do everything to keep him alive, forcing him to eat the rations he had previously discarded out of anger. 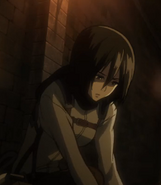 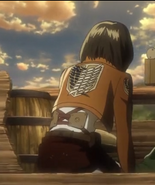 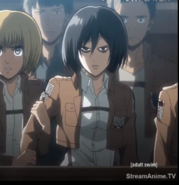