She is a Deadman.

Minatsuki was previously just an ordinary girl. One day, an earthquake happened while she was in a greenhouse. Her mother came, but much to her surprise and horror, she grabbed one of the plants and ran off, leaving Minatsuki behind. This eventually caused Minatsuki to become a warped liar (and gained her Branch of Sin powers) with a sadistic personality.

She lived alone with her father and brother from then onwards. Because of her twisted personality, she manipulated Yō to think that his father was physically abusing her, often resulting in her brother beating up his father in retaliation.

One day, she faked a sexual assault and Yō attacked his father once again. For reasons unknown however, Minatsuki used her powers and killed her father. Not knowing of Minatsuki's abilities, Yō held himself responsible, nevertheless she was sent to DW not long afterwards, and because of her powers, she was confined in G Ward.

Branch of Sin: As a Deadman, Minatsuki possesses a Branch of Sin. This allows her to freely control her blood out of her body. To forcedly bring her blood out, she rips out one of her earrings, causing her ears to bleed.

Branch of Sin: Whip Wing : Her Branch of Sin, which takes the form of long strands of whips which extend from her hair, can deliver immensely quick blows or restrain her opponent. It forms from blood coming out of her earrings and due to this, it blends in with her hair.

Whip Wing, Peacock Peak's Union: A joint attack with Chaplin Sukegawa. Her whip gains the attributes of Sukegawa's brambles, having her whip become larger and with spikes. The attack is powerful enough to defeat Uzume Sumeragi in one hit. This attack is also dubbed by Chaplin as the Love Whip. 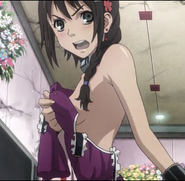 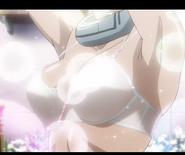 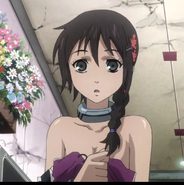 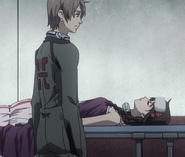 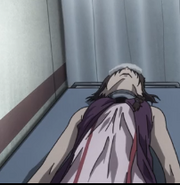