Start a Wiki
Miss Piiza (ピーザ) is the promotional agent of Mr. Satan and his two top disciples, Caroni and Pirozhki. She appears in anime-only scenes during the Cell Games Saga, and also appears in a brief cameo during the Majin Buu Saga and Monaka Saga of Dragon Ball Super.

The Hercule Exhibit #10 in Dragon Ball Z: Buu's Fury is the Piiza Action Figure. The Lighthouse Keeper in the Thieves Den gives it in exchange for a root beer. The in-game description for this item is: "Hercule's P.R. Manager Piiza comes to life in this posable figure. Comes with three different outfits." 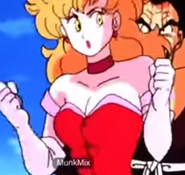 Add a photo to this gallery
Retrieved from "https://xianb.fandom.com/wiki/Miss_Piiza?oldid=294943"
Community content is available under CC-BY-SA unless otherwise noted.