Giant Psyduck
Misty's Psyduck (Japanese: カスミのコダック Kasumi's Koduck) was the fifth Pokémon acquired by Misty in the Kanto region (and the second within the series, after Horsea).

In HopHopHop Town, the local Pokémon had been turned listless by the Psychic waves produced by a Hypno. When a Drowzee nullified the waves, the Pokémon were cured, with the exception of a wild Psyduck that Nurse Joy had been looking after due to a chronic headache. Brock wanted to impress her, so he promised to take care of the duck-like Pokémon.

Later, it was discovered that Psyduck had a permanent headache. Not wanting the continuously ailing Pokémon, Brock ended up passing it off to Misty because she is a Water-type specialist. Misty tried to avoid the little thing, but she ended up capturing it by accident when she dropped a Poké Ball that subsequently rolled towards Psyduck. Psyduck tapped the Ball's control with its bill twice and essentially captured itself.

Out of all of Misty's early Pokémon, Psyduck is arguably the one with the most personality. It was heavily featured, and appears in many episodes, although its appearances started to grow sparse during the Johto saga.

Psyduck does not like to stay in its Poké Ball, and will usually pop out according to its mood. This personality trait has come in handy quite a bit - when Misty or her other Pokémon are captured, it is usually Psyduck who escapes and runs to get help. However, it also tends to frustrate Misty, as it results in Psyduck sometimes emerging for a battle when Misty would prefer to use another Pokémon (although in these cases Psyduck generally manages to win thanks to its Psychic attacks).

Misty mistakenly used it during the Queen of the Princess Festival contest, in which it defeated Jessie and her newly captured Lickitung, who had easily managed to defeat the rest of Misty's team.

Psyduck cannot swim, which is unusual for its species. In deep water it will panic and flail about, like a non-swimmer afraid of drowning. On one occasion it was given a lifebelt for it to enjoy the water. It also has trouble in battle. It knows several powerful Psychic-type techniques, but can only use them when its headache is severe. When Psyduck battled Tyra's Cloyster in The Bridge Bike Gang, Misty considered trying to boost its power by slamming a bike onto its head.

In Bye Bye Psyduck, Misty's Psyduck seemed to have gotten separated from the group. Later on, a girl named Marina arrived with a lost Psyduck. Misty assumed it was hers and noticed that its tail was glowing bright pink, which Marina pointed out that Psyduck would evolve soon. Misty and Marina had a battle, during which Ash tossed Misty her bag. It landed in the water, and when Misty retrieved it, she found a Golduck. Thinking her Psyduck evolved, she battled with Golduck, winning the match against Marina. Even when Team Rocket barged in to steal Marina's Pokémon, Golduck easily rescued them. However, when Misty attempted to recall Golduck, her Psyduck popped out instead, revealing that the Golduck was a wild one and that her Psyduck never even left the Poké Ball.

Misty cleverly used Psyduck in battle in The Stun Spore Detour. As Meowth was about to attack, she recalled Staryu and sent out Psyduck. Meowth angrily bit Psyduck's head, which caused Psyduck to have a severe headache, allowing it to use its Psychic powers and defeat him.

In The Perfect Match!, Misty was going to use Corsola to battle against Ash and his Kingler in the Whirl Cup, but Psyduck popped out of its Poké Ball instead. Kingler used its Vice Grip on Psyduck, which caused it to get a headache. Misty then had Psyduck use Confusion, which sent Kingler flying and knocked it out, making Misty the winner.

In Just Add Water, Misty was having a battle with Dorian, the Gym Leader of the unofficial Coastline Gym. Psyduck watched Misty battle him until Team Rocket showed up and captured Misty and Dorian. Psyduck became angry and determined, unlike the usual attitude it displayed, and wanted to battle Team Rocket. Arbok used Bite on Psyduck which caused it to get a headache, allowing it to use its Confusion attack. Psyduck then learned Psychic and used it to blast Team Rocket off. Afterwards Dorian was amazed by Psyduck's power and complimented on it, saying Misty easily would have won the battle if she had used Psyduck. Psyduck however only seemed confused by the compliment. 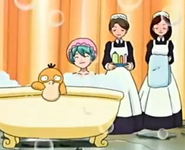 Add a photo to this gallery
Retrieved from "https://xianb.fandom.com/wiki/Misty%27s_Psyduck?oldid=382828"
Community content is available under CC-BY-SA unless otherwise noted.