Mito Uzumaki (うずまきミト, Uzumaki Mito) was akunoichi who originated from Uzushiogakure's Uzumaki clan. After migrating to Konohagakure, she married Hashirama Senju, the village's First Hokage, and later became the first jinchūriki of the Nine-Tails following the events at the Valley of the End.

The Uzumaki and Senju clans — being distant relatives — have always had close ties. Mito ended up marrying Hashirama Senju, who would help foundKonohagakure and became the village's First Hokage.[2]

During her husband's battle against Madara Uchiha at the Valley of the End, Hashirama at some point gained control of Kurama. To gain power for her husband, Mito used a fūinjutsu to seal Kurama within herself, becoming the tailed beast's first jinchūriki.[3] Despite the seal's strength, it almost broke when she was going through childbirth.[4] Eventually, her husband died in war, and Mito was left a widow, going into solitude.

Towards the final years of her life, it was decided that a new host for Kurama would have to be found.Kushina Uzumaki, one of Mito's clansmen, was then selected for the role due to her special chakra. Terrified by the idea of having been taken from her home to become a jinchūriki, Mito comforted Kushina, and told her that in order to counter the fox's hatred, she needed to fill herself with love.[5]Some time after this, the beast was presumably extracted from within Mito and sealed into Kushina.

Mito seemed to be a very calm and composed individual with a dignified air about her. She also had a strong sense of duty to her husband and the village as seen when she turned herself into a jinchūriki by sealing Kurama into herself in order to gain power for her husband.[3] During the time when Kushina discovered that she was to be made a jinchūriki, Mito comforted her, and told her about how to cope with being a jinchūriki.[5]

Mito had long, bright-red hair and large, pupiless eyes. She wore an elaborate, high-collared kimono with the Uzushiogakure symbol on the back of the obi which was tied around her waist. Her hair was arranged in buns with hair pins in them and three clips in the front. She also wore a dark shade of red lipstick and had the Strength of a Hundred Seal on her forehead. She also wore tags with kanji written on them in her hair decals. In her old age, her hair had grown much longer some of which she allowed to hang into her back (in the anime her hair was depicted as maroon in her old age).[6]She, however, maintained the two buns in her hair and wore a simple loose fitting kimono held closed by a simple dark-coloured obi.

Not much is known about her fighting skills, but Kushina hailed her as a powerful kunoichi. She was exceptional at fūinjutsu, able to seal the entirety of Kurama within herself. Even for an Uzumaki, she also had an especially powerful and unique type of chakra, making her well-suited to containing the Nine-Tails.[1] After becoming a jinchūriki, she gained access to even greater reserves of extraordinarily strong chakra.

Being a member of the Uzumaki clan, Mito had the potential to live an exceptionally long life. This was seen in part from her having lived her adult life through the reign of the first three Hokage. While never gaining full control over Kurama itself, Mito was able to access Kurama's ability to sense negative emotions.[7]

Mito made great contributions in the way of protecting Konohagakure after becoming the beast's jinchūriki. She was also the one who realised that in order to counter Kurama's ability to overwhelm his jinchūriki with negative emotions, thus taking control of them, love was needed. This was information she passed on to Kushina Uzumaki which in part helped the young woman to be able to subdue the beast within her and later helped Naruto Uzumaki to subjugate the beast. 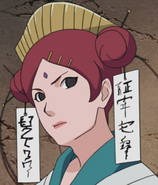