Start a Wiki
A clone of April O'Neil's mother, it was called "Mom-Thing" by Raphael and in the credits.

The turtles find April's long-lost mother frozen in a Kraang Stealth Ship buried under the farmhouse, though Mikey doesn't trust her and senses there's something wrong, he follows her into the woods where she's spilling a canister of mutagen, later it's revealed it's not really April's mom, it's an experimented clone with Mrs. O'Neil's memories. The creature is defeated by April with a psychic blast.Buried Secrets. 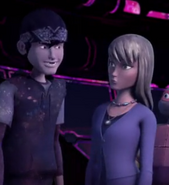 Add a photo to this gallery
Retrieved from "https://xianb.fandom.com/wiki/Mom-Thing?oldid=226471"
Community content is available under CC-BY-SA unless otherwise noted.