Momo grew up in Junrinan, District 1 of Rukongai, along with Tōshirō Hitsugaya.[12][13] While Hitsugaya tended to be a bit of a brat as a child, Momo, finding him amusing, treated him like a younger brother. The two have a close friendship, reflected by Momo giving him the nickname Shiro-chan (Lil' Shiro in the English dub).[14][15] Momo was older than Tōshirō, which gave him the best reason to protect her. Even more, the two were very close, and promised to protect each other. When Momo entered the Shinigami Academy, she excelled at Kidō.[16] It was there she met Izuru Kira and Renji Abarai,[17]who soon became her friends and, later, her fellow lieutenants.[18]

Her friendship with Izuru Kira and Renji Abarai began back in the Shinigami Academy, on a standard field exercise to the Real World to practice performing Konsō,[19] and combat with artificial Hollow replicas. The exercise was led by Shūhei Hisagi. Everything went well until a group of huge Hollows attacked them.[20] Shūhei told everyone to run, but Momo turned to see Shūhei being attacked by a Huge Hollow. She ran to help him, and was followed, somewhat reluctantly, by Renji and Izuru.[21] The group, managing to escape, ended up being surrounded by even more large Hollows,[22] before backup arrived in the form of Fifth Division Captain Aizen and his Lieutenant Gin Ichimaru.[23] At that moment, Momo began idolizing Aizen. Later, Momo was assigned to Aizen's Division after her graduation from the Shinigami Academy. After Gin's eventual promotion to captain, Momo, through much hard work (as noted by Hitsugaya), made her way through the ranks to be Aizen's lieutenant.[16]

Both Momo and Izuru Kira presented Renji with the news of his promotion to the 6th Division as their new lieutenant. Ikkaku Madarame told Renji that, due to his promotion, he was now closer to Rukia in status, and he should renew his friendship with her. Izuru informed him Rukia was being stationed in the Human World, and Momo urged Renji to go after her before it was too late. Renji, refusing, stated it was not official until the ceremony anyway, and he would rather surprise her with his new promotion after she returned.[24][25]

Momo, first to arrive to the lieutenants meeting, is sitting on the floor. She asks Renji if he has seen Aizen anywhere, and when she, admitting she has noticed him acting weird lately, is near tears, Renji, lying, denies he just had a conversation about Rukia with him.

After Renji's defeat at the hands of the Ryoka Ichigo Kurosaki, Izuru brings the unconscious lieutenant to Momo. She intends to call for the 4th Division to heal him, but Byakuya Kuchiki arrives and orders Renji to be incarcerated. She objects to this, but Izuru stops her. Tōshirō arrives afterwards and warns her about Gin Ichimaru.[27] As a result, Momo, attacking Gin when Aizen’s body is discovered, is countered by Izuru. When Izuru refuses to let her kill his captain, she releases her Shikai. Upon arrival, Hitsugaya, stopping both of them in an instant, orders them to be restrained and imprisoned.[28]

Momo is desolate over the death of Aizen, but Hitsugaya and his lieutenant, Rangiku Matsumoto, give her his last letter, which is addressed to her. Matsumoto points out if the letter had been found by any of the other captains, she would not have been allowed to see it. The letter, which holds Aizen's "secrets" and his knowledge of the conspiracy, is actually a sham meant to blame Hitsugaya for everything, including Aizen's "death."[29] When Momo escapes from her cell, she goes after Hitsugaya, and Gin, who arrives on the scene, merely laughs. Hitsugaya attempts to deal with Gin, but Momo tries to stop him. He hits her much harder than he means to, and in the fray with Gin which follows, Gin traps Hitsugaya in a situation where he has two choices: be killed, or let Momo die. Hitsugaya realizes this too late, but Matsumoto, reappearing, stops Gin's sword.[30]

When Momo is put back into a cell, Hitsugaya puts a spell on her cell to keep others from attacking her. It is very difficult to break from the outside, but very easy to break from the inside. However, Hitsugaya did not count on Momo’s determination to avenge Aizen, and she breaks the spell from the inside. Following Hitsugaya and Matsumoto while hiding her presence, she is shocked to find the Central 46 massacred. When she is reunited with Aizen, he, betraying her, stabs her through the chest, and she nearly dies.[31]

When Hitsugaya returns to the Central 46 Compound, he sees Momo’s body. He is surprised to see the one behind it all was Aizen and not Gin. Aizen's reasoning behind almost killing Momo is since he built her to not be able to live without him, he has done her a favor by killing her. He tried to get other people to kill Momo, but when that failed, he was left with no choice, but to kill her himself. Hitsugaya, attacking Aizen, is easily defeated. Aizen abandons Momo and Hitsugaya once Unohana and Isane show up at the Central 46 Chambers.[32]

After Yamamoto debriefs Hitsugaya on Aizen’s plan concerning the King's Key, the Captain-Commander allows Momo to talk. Hitsugaya, somewhat surprised to see her up, asks her if she should be walking around. Momo tries to persuade him she is better, though she does not look it. Momo apologizes for not believing Hitsugaya and attacking him. Hitsugaya tells her not to worry about it, as it did not bother him. As he tells her to get back to bed so she can get rid of those bags under her eyes, Momo thanks Hitsugaya for accepting her apology. He retorts that even if she is not one who looks like a little kid, if she does not sleep more, she will not ever grow. Momo, yelling at him, tells him he is not one to talk about growing.[33]

When Hitsugaya reminds her she is to call him Captain Hitsugaya, Momo, remembering the situation, asks Hitsugaya if he is going to fight Captain Aizen. When Hitsugaya says yes, she, asking if he is going to kill Aizen, begs him to save Aizen. She states what Captain Aizen is doing is bad, but she, thinking he has a good reason, expresses her belief Gin or someone else is forcing him to engage in his actions. Yamamoto, knocking her out, hands over her care to his lieutenant, Chōjirō Sasakibe. Yamamoto, apologizing to Hitsugaya, says he was just respecting her wishes by allowing her to speak, but perhaps it was too soon.[34]

Momo, appearing in the battle of Fake Karakura Town, launches a fireball through Tobiume at Apacci, who is about to attack Rangiku Matsumoto. She declares herself as Aizen's enemy; Matsumoto, however, worries slightly, as she still addresses him as 'Captain'. Upon disclosing her method of sneaking up on Apacci to Tier Harribel's Fracción, namely through using Kidō to conceal her presence, she, applying Tobiume to a "Kidō net", engulfs the three in an explosion.[35]

The Arrancar, using their Resurrección to heal themselves, combine their powers to counterattack. Each of them sacrifices their left arm, using them to activate an ability they call Quimera Parca, forming a creature Apacci claims is called Ayon. Rangiku tries to defend herself against the creature, but it, tearing through the right side of her abdomen, severely injures her. Momo, trying to save Rangiku, catches her in a star-shaped Kidō net, but the creature, attacking Momo, takes her out with one punch to her stomach, with Momo stating all of her bones are broken. She is saved by the timely arrival of Izuru Kira and Shūhei Hisagi.[36]

Later, Izuru heals them. Healing Rangiku first, he tells Momo to hang on. Momo says Rangiku is seriously injured, and he should heal her first.[37] After the Espada, in Aizen's eyes, prove unable to defeat the Shinigami, he decides to enter the fight himself. As Hitsugaya impales him through the chest and it appears Aizen is finally struck down, it is revealed Aizen has been using his Zanpakutō's hypnotic powers well before the fight started, somehow tricking Hitsugaya into stabbing Momo instead.[38]

Ten days after Aizen's defeat, a member of the 12th Division reveals Momo is undergoing organ regeneration in their squad.[39]

Kidō Expert: Momo excels at Kidō. Captain Hitsugaya and Izuru have stated Momo is a Kidō master. She can use multiple spells in conjunction with each other and her Zanpakutō, creating a unique way in which to attack and incapacitate her opponents. In this way, she can make common spells all her own.[64] She can use a single Kidō technique on two separate targets at once.[65]

Expert Swordsman: Momo is proficient enough to cross swords with other lieutenant-level Shinigami. While she is capable enough in swordsmanship to attain her high-level seated position, when facing Harribel's Fracción, she states she knows she is not strong enough to combat them using her swordsmanship skills, instead sneaking up on them and using Kidō.[67]

Shunpo Practitioner: Momo is skilled enough in the use of Shunpo to keep up with lieutenant-level Shinigami.[68]

High Spiritual Power: Being a lieutenant of the Gotei 13, Momo boasts a high level of spiritual energy. Her Reiatsu is red.[45]

Skilled Tactician: Knowing her own limitations in direct battle, Momo is able to compensate for it through crafty combination attacks (such as when she caught Sung-Sun, Mila Rose, and Apacci in a Kidō net). Because of her expertise in Kidō, Momo is able to attack in a number of versatile ways.[69]

Tobiume (飛梅, Flying Plum Tree): In its sealed state, Tobiume takes the form of a regular katana with a light red handle, with the only slight difference being the five-petal flower designs stamped on the rectangular tsuba. Her Zanpakutō is a fire-type.[70]

Shikai Special Ability: In this form, Tobiume can release fireballs that explode on impact from its blade.[70]The release of a fireball is accompanied by a sound, similar to a seagull cry. 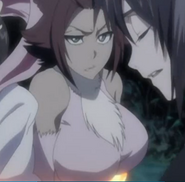 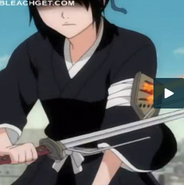 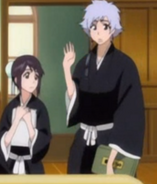 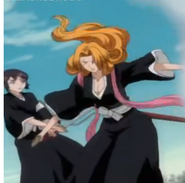 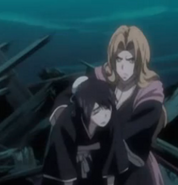 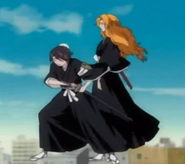 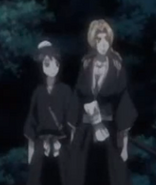 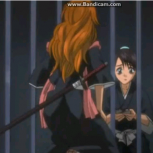 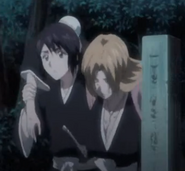 Add a photo to this gallery
Retrieved from "https://xianb.fandom.com/wiki/Momo_Hinamori?oldid=292586"
Community content is available under CC-BY-SA unless otherwise noted.