Mukuro (軀, Mukuro) is a special type of elite and powerful demon called a Mazoku (loosely meaning the "Tribe of The Devils"). She is also part of a triumvirate of upper S-class demons known as the The Three Kings, who rule over Demon World. Her character is introduced at the beginning of the Three Kings Saga.

Mukuro is voiced by Minami Takayama in the original Japanese version and is voiced by Wendy Powell and Vaughn Jackson in the Funimation English dub.

In the anime, Mukuro was abandoned on a freezing-cold snowy night. She was found by a wealthy humanoid demon, who became her "father". He would go on to abuse and rape her at his own leisure. He placed a micro chip in her to show the 'goodness' in him- so that when she ever thought about killing him, the chip would activate and show how good he was to her.

The manga is a little different, and far more graphic in that regard. It depicts Mukuro as having been born into slavery, her insides surgically altered in order for her owner (her father Chikou) to be able to "play" with her that much easier. In a particular macabre and sadistic twist, he would go on to rape her on her birthdays as a present. As a result, Mukuro came to view everything about her childhood with disgust at both Chikou and herself.

Eventually, at the age of seven, Mukuro poured acid over her head in order to avoid his desire, only leaving her left side unharmed. He tossed her out, which she describes as 'rebirth'. She then replaced her damaged limbs with robotic parts. She swore to seek power at all costs and gained a reputation for violence, covering her face with bandages and leading many to believe that she was a man.

With Yusuke joining Raizen, and Kurama joining Yomi, Mukuro sends a video message (a spirit of words) to Hiei, asking him to come see her. The friends come to Demon World together and then head their separate ways. Mukuro asks Hiei to show his true strength by meeting the man that gave him the Jagan eye. It ends with both dying, but Mukuro saves them. She puts Hiei into a regeneration tank and strips naked to show him her true form.

Mukuro agrees to join the Demon World Tournament, hosted by Yusuke. And in the manga goes to pay her respects to Raizen's tomb, leaving some flowers.

While fighting Hiei in the anime, she continues to test his strength, and he proves to be no match for her in hand to hand combat, and she provokes him into using his Jagan eye. They both seem to accept that their bout can only have one appropriate conclusion; thus, Hiei releases his Dragon of the Darkness Flame, but not with the intent to kill her. Mukuro seems to do the impossible, catching the Dragon's mouth and spllitting it in half, sending Hiei soaring backwards as a result. However, Hiei gets the last laugh (so to speak) when he reveals that through his efforts, he managed to break the shackle around her left wrist, effectively freeing her from her painful past. Following this, a drained Hiei walks slowly towards her and Mukuro catches him in an embrace as he drops to his knees. The two connect in this anime-exclusive moment, and are seen closing their eyes, seemingly content.

During the finals, in both the anime and the manga, Mukuro faces off against Natsume, one of Raizen's sparring buddies, she defeats her, but narrowly. Later, she loses to Enki, another of Raizen's friends and the title of King of Demon World ends up going to Enki.

In the manga, after the Demon World Tournament, Hiei learns of the nature of Mukuro's power. When he confronts her about it, on her birthday no less, she pushes him away, in no mood to deal with his abrasive personality.

When he mentions Chikou, she bristles. When he asks why she never sought revenge, she inexplicably experiences a flashback to the one time that Chikou had decided, on a whim, to act like a father should have behaved towards his daughter.

Hiei says that she was clinging to that one moment and that she had become strong because she was confused, not because she had suffered, and added that she disgusted him. She responds by promptly blasting him out of her room with a burst of power that nearly blows a hole in his torso.

When he returned after a consultation with Kurama and a confrontation with Chikou, he reveals that the memory, of that one time Chikou had acted like a father should have, was actually manufactured memories conducted with simple hypnosis; false images implanted into her subconscious mind, programmed to flood her mind's eye whenever she had the urge to harm or kill Chikou. This served as a defense system that prevented her from taking revenge upon him, now that she had become an S-class demon; he had assumed that her inner conflict would paralyze her forever, which had left him complacent and unprepared.

Hiei vowed to break her inner conflict and did so by giving her Chikou, who was infected by a plant parasite that Kurama had supplied Hiei with, that kept him in place and regenerated any wound inflicted upon him. He then suggests that she mutilate her former tormentor however she wants.

He added that when she grew tired of torturing Chikou, destroying his brain would be the only way to kill both the plant and her father. She simply smiles at this, to which he smirks and wishes her a happy birthday.

She is seen in Eizou Hakusho with a somber look on her face after Hiei's departure. While Hiei avenging her by trapping her father in the plant isn't shown, one can still see the body of her father bonded to the plant in shadow proving that the manga storyline indeed happened in the anime as well. It is revealed that he still lives in Mukuro's castle and is training for the next tournament in Human world. It also appears that Hiei gave Mukuro his tear stone, as she is seen wearing it as a necklace in the same manner that Hiei did.

Ruthless Killer: In both the manga and the anime, it's said that Mukuro's incredible power depends entirely on her state of mind. In the anime, it seems that her power is directly-proportional to how much hatred she feels. As stated by her former henchman, it is also revealed that Mukuro utilized, at most, half of her maximum strength in the Demon World Tournament. Thus, Mukuro at her peak was very likely either strongest or second most powerful demon, only one possibly stronger than her was Raizen in his prime. Mukuro's ruthlessness as a ruler and merciless brutality in battle strike fear in the minds of countless apparitions across the planes of Makai. Her hard-earned reputation alone devastates the composure of her opponents.  Many powerful S-Class Demons would rather shamelessly admit defeat than face her in combat. Only when facing Hiei, does she hold back and hesitate to go for the win. The similarities of their respective life experiences creates a tangible connection between the two, as can be clearly seen in their anime-exclusive battle. This appears to be the source of her hesitation; she finds herself feeling emotions everyone had thought her incapable of feeling given her dark past.

Superior S Class Energy: Being a very Experienced Upper S Class Mazuko, her power is only challenged by few Demons, she defeated Hiei, who was a Upper S Class Demon during their battle, despite her only barely using more than half of her Full Power against him because she was holding back against him. She also barely defeated Natsume, despite being at a disadvantage due to losing a great of her Rage and Hatred, which is the source of her power. 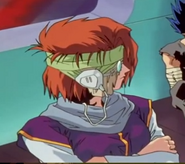 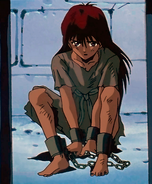