"The desk-work expert who takes care of the division's administrative matters on behalf of her captain, who hardly performs any normal tasks." - Tite Kubo[1]

Nanao Ise (伊勢 七緒, Ise Nanao) is the co-lieutenant of the First Division of the Gotei 13, under Captain Shunsui Kyōraku, and Vice-President of the Shinigami Women's Association.

Nanao is a slim and youthful girl with long black hair normally kept pinned back, with flat bangs that hang to the right side of her face. Nanao also wears a standard Shinigami outfit. She has slightly light blue eyes that have a deep tint of violet and wears glasses with a slight oval shape to them.[3] As a child, she had rounder glasses with chin-length hair that framed both sides of her face.[4]

Seventeen months after Aizen's defeat, Nanao has her bangs tucked behind her right ear.[5]

As a young girl, Nanao had short black hair kept in a bob, and wore a simple white kimono.[6] Upon entering the Shin'ō Academy, she grew her hair out and began wearing glasses in addition to the standard student uniform.[7]

She is a very serious and pragmatic person who often puts up with her captain's silly antics, but like all lieutenants, she is extremely respectful of her captain and follows his instructions without hesitation. She is almost always carrying a heavy book. Nanao is often accosted by her captain, whose teasing takes various forms. Nanao's usual reaction is to scold him or hit him with something, usually a fan. When she is particularly annoyed she takes off her glasses in an act so frightening that most people who see it are reduced to gibbering wrecks just by witnessing it.[8] Even the sadistic, cold-hearted 12th Division captain, Mayuri Kurotsuchi fell victim to this intimidating spectacle.[9]

In her free time, she likes to go shopping, but even more to read, and often visits the library. She is on good terms with fellow reader Momo Hinamori; she even brought her books during her hospitalization. Nanao also has an article serialization in Seireitei Communication, titled "Please be Moderate", which is very popular, especially among the male readers. Nanao is known to be an excellent calculator, a skill very handy, given that she has to do most of her captain's paperwork. Her favorite food is sweet bean jelly, and she does not like powdered green tea, a trait which is shared with her captain.[10]

Nanao is the Vice-President of the Shinigami Women's Association, but is usually the one who attempts to maintain and control the meetings due to the juvenile actions and behaviors of President Yachiru Kusajishi. Yet while she attempts to be the main moderator, Yachiru usually has higher say on everything from budget decisions to activities done by the club making any of Nanao's comments or advice worthless. She is also frequently at odds with Shinigami Men's Association leader Tetsuzaemon Iba, of whom she usually forces her superiority and control regarding the influence and power she and the Women's Association have over his association.

Nanao Ise was the daughter of Shunsui Kyōraku's deceased older brother and the previous head of the entirely female House of Ise.[11] As a young girl, she overheard her mother entrusting the House's Zanpakutō, Shinken Hakkyōken, to Shunsui. After her mother died, Nanao was taken in by an elderly couple who were relatives of her family and entered the Shin'ō Academy, where she excelled in Kidō despite being unable to imprint on her Asauchi. During her tenure at the academy, Nanao saw Shunsui visiting the headmaster and recognized his hairpins as being identical to those belonging to her mother. Upon graduating, Nanao was surprised to learn that she had been placed in the 8th Division despite having put the Kidō Corps in her assignment preferences, and eventually saw Shunsui again, where she noticed that he had changed his kimono and removed his hairpins; this allowed her to recognize him as the man whom her mother entrusted something precious to.

Nanao was notable for being in the Eighth Division when she was a little girl, and enjoyed being read to by former Lieutenant Lisa Yadōmaru, something they did regularly each month around the time of the first. Eventually, between the period of time when Lisa was forced to hide alongside the other transformed Visored and the present day, she worked her way up from being Shunsui's subordinate to his lieutenant.

While her captain, Shunsui Kyōraku, relaxes on the floor beside her, Nanao notices that one of the Ryoka, Yasutora Sado, is managing to make his way through the Eighth Division barracks. While observing the Human run, she asks Kyōraku if she should go out and take care of Sado since he is only a mere Ryoka that is causing havoc. In response to her query, Kyōraku rebuffs her request and begins to teasingly call her “Nanao-chan!” which causes her to become irritated and to smack him on the head with her fan.[13] She later spreads flower petals so that Kyōraku can make his grand entrance in front of Sado. But when he starts teasing her, she gets mad at him and dumps the rest on his head.

Nanao does not get involved in the fight between her captain and Sado, preferring to observe the events from the sideline. A messenger from the Onmitsukidō arrives and informs her that Sōsuke Aizen, Captain of the Fifth Division, has been murdered. As soon as Kyōraku defeats Sado, she runs to his side to update him of the news she has just learned. Both of them turn to leave the battlefield but Nanao notices that despite being cut down by her captain, Sado is still alive. Upon this discovery, she gathers a dens amount of Reiatsu around her right hand and requests permission to deliver the killing blow to the Ryoka. Much to her surprise, Kyōraku denies this request and instead advises her to bring the injured Sado to the Fourth Division for medical attention.

On the morning of the scheduled execution of Rukia Kuchiki, Nanao seeks out her captain in order to inform him of the time. She finds him lying down on a roof, having previously fallen asleep while relaxing. She wakes him up in order to prompt him to leave for the event but Kyōraku soon begins to teasingly flirt with her in his usual way. She tries to tolerate his words but soon she angrily admonishes him for his attitude while snapping a reed from his mouth and asserting that they should leave for the Sōkyoku Stand. Kyōraku sits up reluctantly, clearly conflicted about the execution, and asks Nanao what she thinks he should do about it. Nanao insists that no matter what she thinks or advises, he would still do what he wanted to. “Don’t worry,” she also says, “I will follow you at a safe distance... so that I will not get dragged into anything.”

After her captain and Jūshirō Ukitake help Ichigo Kurosaki in preventing the execution of Rukia from taking place, she follows the duo as they seek an area that they can battle Genryūsai Shigekuni Yamamoto without involving others. Yamamoto follows them and Nanao immediately begins to notice that Yamamoto's power is intense so she decides to try and help her captain fight him. As soon as she reaches into her robe, Yamamoto begins to exert an immensely dense amount of Reiatsu that completely paralyzes her and even prevents her from breathing as well. Kyōraku soon shields her from the power, apologizing that she was hurt by his decisions, before he swiftly carries her to a safe distance away from the battle where she can recover. Left alone, she wonders to herself that despite Kyōraku and Ukitake teaming up together, the task of defeating Yamamoto is still nearly impossible 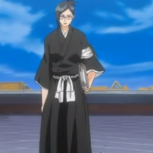 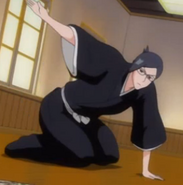 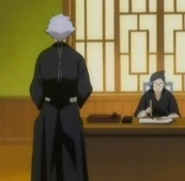 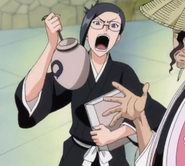 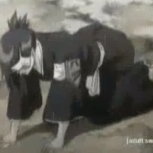 Add a photo to this gallery
Retrieved from "https://xianb.fandom.com/wiki/Nanao_Ise?oldid=233512"
Community content is available under CC-BY-SA unless otherwise noted.