A member of the Hyuga Clan.

While the Saezuri is revealed, learning that Disonasu employed Kabuto Yakushi to wipe out the residents of Tonika Village, Dokku tried to attack Disonasu, but stopped by a reincarnated puppet and restrained by a resurrected Takigakure shinobi. Disonasu also praised Naruto about defeating Pain, the one who scarred him and left him powerless, before kicking the boy repeatedly. Miina and the orphans came to The Hole to give the iron bars, but Kabuto’s clone intercepted them

Neji loses his energy while scouting the company’s outskirts for enemies, and Kiba advises him to go seek medical treatment. Meanwhile, at the medical encampment, Shizune and Sakura are treating numerous injured shinobi, while mysterious killings occur in secret throughout the base. Neji is revealed to be the culprit after slaughtering two more medics, and then goes after Sakura. However, back at the company’s base, the real Neji is still resting with Kiba and Akamaru, while Hinata and Shino take over watching the frontlines.

Senbon Sparring is an important ritual of the main family. During ones 13th summer one must drill daily until reaching a thousand sparring exchanges. Then the head of the family becomes your sparring partner and passes on Jutsu secrets.

Whats the matter with you? Your Chakra flow is all over the place. You're too hung up on each individual Jutsu focus on your accuracy. It makes no sense to do one well if the overall flow is poor. 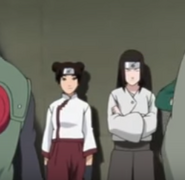