Nonō Yakushi (薬師ノノウ, Yakushi Nonō), renowned as The Wandering Miko (歩きの巫女, Aruki no Miko, Viz: The Wandering Nun), was a jōnin of Konohagakure,[5] and a captain of the Medic Corps. She was previously an Anbu from Root, but left the organisation to become a caretaker at an orphanage located on the outskirts of the village where she was called "Mother" (マザー, Mazā). While undercover in Iwagakure, she went by the name "Nanigashi" (ナニガシ, Nanigashi).

Nonō was a member of Konoha's Anbu sub-division Root. She was an expert in the area of intelligence gathering, but left the organisation to run a small orphanage instead.[6]

While out one day, she found a wounded child near a deserted village. She healed the child and brought him back with her to the orphanage. As the child could not remember anything, at Urushi's behest, she named the child "Kabuto" for the helmet he was wearing at the time. One night when he was caught out of bed past curfew, the other caretakers, Keiri and Kanpu, brought him to the clock in order to teach him time. Noticing that he was squinting, she took off her own glasses and gave them to him. This caused the young Kabuto to break down crying, thanking her for everything as she comforted him.[7]

Three years after taking Kabuto in, the orphanage was treating wounded Konoha shinobi, with Orochimaru taking an interest in Kabuto Yakushi. Root leader Danzo Shimura Shimura with two Root guards (one being Orochimaru) approached Nonō stating that they were in need of her expertise in intelligence gathering. Requesting that she infiltrate Iwagakure and gather information on their plans, Nonō initially turned the mission down but was forced into doing it after the two Root Anbu subtly threatened to attack the orphanage. Nonō agreed to work with them, and was outraged when Danzō stated that he needed a child to replace the Root shinobi who had died in order to retrieve the intel on Iwagakure. She was even more shocked when she learned that Kabuto, who had spied on the meeting, volunteered to go with them. Five years into Kabuto's life as a shinobi, he was sent on a mission to infiltrate Iwa where Nonō attacked him. She was critically wounded as a result of Kabuto's chakra scalpel, and the panicking Kabuto tried to treat her, but Nonō no longer recognised him, which shocked the young man, and prompted him to run away. She was later found by Kitsuchi and another Iwa-nin.[6]

Orochimaru later revealed to Kabuto that this unfortunate encounter was engineered by Danzō himself: having become an accomplished spy, Kabuto has become a dangerous asset for Root and was marked to be eliminated. As such, Nonō was double-crossed by Danzō into believing that they would release Kabuto from Root, in exchange for her assassinating another person — who in actuality was to be the real Kabuto himself. As such they began a long, slow process of brainwashing Nonō showing her pictures of Kabuto growing up and eventually switching him with an entirely different person so that when she was given the mission to kill the real Kabuto, she would not recognise him.[8]

Nonō was a very kind and calm woman, taking in Kabuto and then later begging for them to let him stay even when they could not afford it. She was also very generous, giving the young Kabuto her glasses. Danzō noted that though she was a member of Root, she was unable to lose her emotions which was why she wasn't suited for Root.[9]

She was a young woman with shoulder-length light brown hair covered by a white coif and emerald green eyes. She wore a black, loose-fitting gown with a white apron over it with sandals. She also wore circular glasses before giving them to Kabuto. She replaced them with a pair of square glasses, given to her by Kabuto, shortly after.[3]

During her encounter with Kabuto in Iwagakure, she wore the village's flak jacket and forehead protector.

Not much is known about her abilities other than she was skilled in medical ninjutsu and was able to heal wounds which means she must have an excellent chakra control. She taught her adoptive son Kabuto medical ninjutsu, proving to be a highly capable teacher as these taught skills became the key-focus of Kabuto's fighting style.

She was also noted to be an elite kunoichi in the area of intelligence gathering as Danzō stated she was the only one that could be trusted with a mission of such high importance and risk. 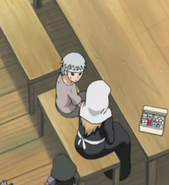 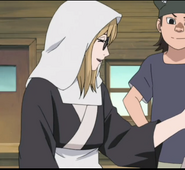 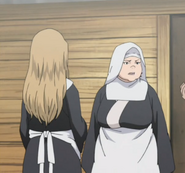