Norman Osborn appears in the Ultimate Spider-Man cartoon series, voiced by Steven Weber.This version is a corrupt industrialist fascinated with Spider-Man, has a strained relationship with Harry Osborn, while the Green Goblin (simply called the "Goblin") is amalgam of the Ultimate Marvel version's green-skinned monster and the original incarnation's glider and pumpkin bombs. In the first season, Norman's master plan is to obtain Spider-Man's DNA in order to create an army of genetically-modified Spider Soldiers who are imbued with Spider-Man's powers, therefore make Oscorp Industries the leading weapon industry in the world. Doctor Octopus's first attempt at this results in the living armor Venom. After discovering Harry's connection to the symbiote, Norman becomes intrigued by his son's new abilities. In the season finale's first part "Revealed", Osborn conducts a plan to lure Spider-Man to Oscorp. After revealing his plan to Spider-Man, Doctor Octopus betrays Norman by injecting him with a serum mixed with both Venom's and Spider-Man's DNA, resulting in Norman's transformation into a large, green-skinned, goblin-esque monster. At first, Green Goblin is only a savage beast, intent on destroying everything in his path. However in the season finale's second part "Rise of the Goblin", Green Goblin gradually begins to regain intelligence and psychopathy. In the second season, Green Goblin tries to find a host for the Venom symbiote. The first attempt involved finding a better son. After Goblin attacks and seemingly destroys Spider-Man, he later captures and injects Peter Parker with an enhanced symbiote sample, hoping Peter will become a more perfect version of Venom as well as a better son than Harry. But being unaware that Peter is Spider-Man, the sample becomes imperfect and Peter is transformed into Carnage. Ordering Carnage to bring Spider-Man, he is surprised when Harry arrives as Venom once more. Green Goblin and Venom battle, but thanks to Peter, Harry rejects the symbiote's control. The second attempt involves an attack on several enemies. Green Goblin allows himself to be brought aboard the S.H.I.E.L.D. Tri-carrier, so that he can release the symbiote in hopes of turning all of the S.H.I.E.L.D. agents into Venom soldiers. Eventually, Green Goblin bonds with some of the symbiote transform into Goblin-Venom. He battles Spider-Man, while Doc Ock develops an Anti-Venom antidote for the Venom-infected agents. After releasing the cure, Goblin is not only relieves of the symbiote but is also turned back to normal. Wanting to amend for his actions, Osborn tries to be a hero as the Iron Patriot. Iron Patriot teams up with Spider-Man to stop Doctor Octopus's new army of Spider-Soldiers. Later, Iron Patriot assists Spider-Man's team is stopping a prison break, caused by an armored Sinister Six. While they manage to fend off the villains, Doctor Octopus tries to turn Iron Patriot back into Green Goblin. While Iron Patriot attempts to prevent this, Spider-Man curing the Lizard serves as a distraction, allowing Doc Ock to inject Iron Patriot with the Goblin serum, transforming him back into Green Goblin. Green Goblin manages to defeat and incapacitate Doc Ock, but retreats with Spider-Man's team, with the intent of making them his minions. In the season finale "Ultimate", Green Goblin injects Power Man, Nova, Iron Fist and White Tiger with the Goblin serum, transforming them into Goblin-like versions of themselves and reactivates the original S.H.I.E.L.D. Helicarrier. He then reveals his plan to Spider-Man to unleash the Goblin serum across the world, creating an army of Goblins to serve as his army. He is defeated by Spider-Man and his cured team and imprisoned in the S.H.I.E.L.D. Tri-Carrier. In the third season, Green Goblin is freed from his prison unintentionally by Agent Venom and Iron Spider. With help from Taskmaster, Green Goblin steals the Siege Perilous from S.H.I.E.L.D and escapes through a portal.

In the "Spider-Verse" miniseries, Green Goblin imprisons Electro in the Siege Perilous to act as a living power source so he can travel the Marvel Multiverse to acquire DNA samples from the alternate reality versions of Spiderman for a "very special purpose". with Spider-Man pursuing him, Green Goblin first arrives to Marvel 2099 to get a blood sample from a futuristic successor to Spider-Man, then a gender-swapped universe where he enlists his female counterpart Norma Osborn (voiced by Wendie Malick), who is based on the original Green Goblin incarnation, to help him with Spider-Girl in return for a vial of his Goblin serum for her use. Goblin then gets a blood sample from Spider-Man Noir, a chin-hair from Spider-Ham, and another blood sample from Spyder-Knight. Goblin finally arrives to an alternate version of his universe where he attempts to get the blood of Spider-Man (Miles Morales) while finding himself being attacked by the winged and more demonic version of himself (also voiced by Weber). During this, Goblin finally figures out Spider-Man's identity as Peter Parker by looking at the deceased Peter's gravestone. After Green Goblin returns to the Helicarrier, he uses the serum he created from the DNA of all of the alternate Spider-Men to gain spider-like abilities. As he engages Spider-Man while taunting him, Goblin reveals he knows Peter's secret identity, and joyfully begins threatening Peter's Aunt May and his friends. After he mentions Harry, Peter attempts to appeal to Norman Osborn, trying to deter him from harming his son, but Goblin has become so deranged that he no longer sees himself as Norman Osborn, and angrily states that love is a weakness, and that he has no weaknesses "because [Goblin] loves no one". Gradually, the serum further mutates him, transforming him into an Man-Spider-like form as he rechristening himself the Spider-Goblin. Recruiting the help of all of the alternate Spider-Men as the Web-Warriors to battle Spider-Goblin. With Electro's help, Spidey manages to turn Green Goblin back to his human form again. Norman is last seen in a retirement home, having lost his memories from the last few years, including his time as Goblin and having learned of Spider-Man's identity, and happily greets Peter and Harry as they come to visit him.

The Goblin makes an appearance in the episode "A Nightmare on Christmas", in a alternate reality that Peter wished for where he gave up being Spider-Man and became rich. But Peter learns that Goblin is now ruling New York when Nova and Hawkeye appear at his penthouse, fighting two members of Goblin's Spider-Soldier army. After the soldiers defeat and kidnap Hawkeye and Nova, Peter dons his costume and arrives at a much bigger and threatening Oscorp tower, and encounters a horned, suited version of Goblin, who now calls himself the Goblin King . Having defeated and presumably killed most of the Avengers, and having taken their equipment (i.e Iron Man's armor, Black Widow's gauntlets, Captain America's shield, Falcon's wings, and even Mjolnir) he attacks Spider-Man. After a short yet intense battle, Spider-Man defeats Goblin King and learned this reality was an illusion created by Nightmare.

I don't know what troubles me more, Osborn flying around Manhattan in un-sanctioned war armor, or that you couldn't be bothered to bring him in.


Osborn? Very, Octavius.
More than ever I'm convinced Spider- Man is the key to military superiority.
Once I replicate his abilities, I'll market an army of Spider-enhanced super-soldiers to the highest bidder.
Nick Fury is a fool to think he can get Spider- Man to work for S.H.I.E.L.D.
I prefer Spider-Man the way he is, headstrong, undisciplined, easy to anger.
And easier to turn. 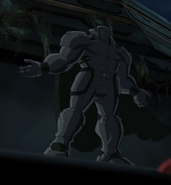 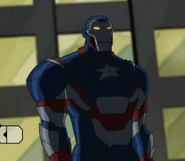