She is a Mod Soul.

Nozomi Kujō passes through the Dangai wearing a large cloth. She exits the Dangai above Karakura Town and falls to the ground. She is found unconscious by Kon in a car park. Kon brings her to the Kurosaki Clinic and places her in Ichigo Kurosaki's bed, where she remains asleep for a considerable time.The following day, she is found by Kon in front of the television and he quickly ushers her back to Ichigo's room. He complains about her having left the room. He tells her that he brought her there without the permission of the owners, insisting that she is not to leave the room, otherwise he will be branded as a pervert. Kon introduces himself, explaining that he found her and asks Nozomi for her name. She refuses to tell him and calls him derogatory terms such as "pervert" and "idiot". She refuses his offer of food and asks where she is. Kon tells her that she is in Karakura Town before being forced to hide her from Yuzu Kurosaki.

When Kagerōza Inaba arrives at the Kurosaki Clinic, Nozomi flees through a window, and is pursued by Reigai of Izuru Kira and Nanao Ise. She uses Tenran to impede the Reigai and escape. Nozomi finds herself in an abandoned industrial area, where Kon approaches her. However, Kon is bound by Inaba's Kidō. Inaba approaches Nozomi, telling her that it was pointless to escape. He then prods her with his cane, causing her to collapse.Uryū Ishida intervenes before Inaba can do anything.[1] The unconscious Nozomi is retrieved by Reigai-Izuru Kira during Inaba's battle against Uryū and Ichigo. She is then rescued by the newly-arrived Tōshirō Hitsugaya.

Back at the Urahara shop, Nozomi lays unconscious as Orihime assesses her condition. She begins to awake and Uryū informs her of her whereabouts, saying it is safe. She tries to get up, but Orihime tells her not to over exert herself. As Kon approaches, Nozomi questions what Kon is. He asks her why Inaba and the others were pursuing her. She calls him lame, which provokes Kon into revealing his true identity as a Mod-Soul. She is surprised at this, to which Kon repeats his earlier question, stating that the others might be able to help. However, as he reaches out to embrace her, she smacks him on the head with a plant pot, calling him a perverted freak. Kon berates her, as Ichigo tells him to let it go, stating that she doesn't have to talk if she doesn't want to. Ichigo then leaves for a meeting and Nozomi goes outside with the others as they set up a barbecue. Kon notices Nozomi watching them from afar. He walks towards her, wondering what she is holding in her hand. He realizes it is chili powder, to which he explains the concept behind it, as she places it inside his mouth, causing him to go berserk. During the confusion, she flees.

Later, Kon finds her walking by the riverbank; she refuses to respond to any of Kon's questions. Kon gets angry at this, to which Rangiku Matsumoto emerges behind him, telling Kon that she will make Nozomi change her mind. Rangiku grabs Nozomi after Kon leaves, revealing herself to be a Reigai. Nozomi tells her to let go, as the Reigai attempts to bring her back to Soul Society via Senkaimon. As Nozomi looks down, she notices the fake's unusual trinket, as Nozomi proceeds to bite her on the shoulder, provoking Rangiku to throw her into a nearby wall. Kon arrives to try and rescue Nozomi, but gets beaten up badly. As Reigai-Rangiku then goes to get Nozomi once more, Ichigo, Rukia, Renji Abarai, and the real Rangiku arrive. Reigai-Rangiku cedes defeat, returning back to Soul Society. Nozomi then returns back to the barbecue with the Gotei 13.

The next day, Ichigo goes to his room, telling Nozomi to go to bed. However, he only finds Kon tied up, as they go in search for Nozomi. Nozomi experiences a nightmare, in which Inaba is pursuing her, as she wakes up abruptly. Kon inadvertently comes across her, as she senses the Reigai's Reiatsu, proceeding to flee the scene. [9]As Nozomi walks throughout the town, Kon follows her intently. She tells him that she doesn't know where the exact location of the place she wishes to go to. Later, Nozomi is harried by Kon, who attempts to make her return back to Ichigo and the others. She wonders why they would go to such lengths to protect her, continuing on her current path. Kon forcibly clings onto Nozomi's leg, stating that he will drag her back, if that is what it takes. Nozomi reveals to Kon that she will fix things herself for Ichigo's sake, stating that that was the very reason she arrived in Karakura Town. He continually pesters Nozomi, prompting her to hurl him into a nearby tree. She states that she has found where she needs to be, motioning towards a run-down shrine. Nozomi asks him where there is a place similar to this one, to which Kon reveals that she is referring to the mountain temple. She then proceeds to follow Kon, who leads her up the mountain. 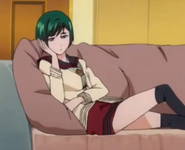 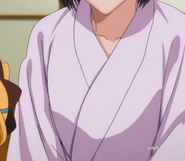 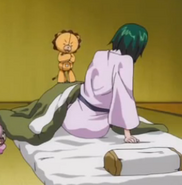 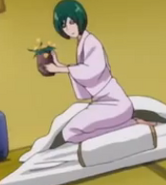 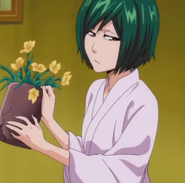 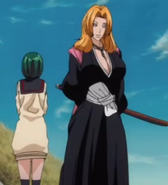 Add a photo to this gallery
Retrieved from "https://xianb.fandom.com/wiki/Nozomi_Kujo?oldid=351365"
Community content is available under CC-BY-SA unless otherwise noted.