The island was given to Dr. Fuji as part of a research grant from Team Rocket's boss,Giovanni, who intended for Fuji to use his previous research into cloning and genetic manipulation to create an enhanced clone of Mew. As Fuji had recently lost his daughter,Amber, he had been intending to clone her to bring her back to life.

Though Amber's clone died, as did clones of the Kanto starter Pokémon, the clone of Mew, Mewtwo, still young, survived. To calm him after the loss of its friends, he was injected with a substance that would make him forget. Eventually, Mewtwo was mature and fully-grown. He sensed the scientists outside of his tube, and shattered it to take his first breath. The scientists were thrilled at Mewtwo's existence; however, they did not see Mewtwo as a living being worth respect, but only as the end result of their experiment. Because he had lost its compassion, he destroyed them for their ignorance, and was discovered among the burning wreck of the lab by Giovanni, who took him back to Viridian City to use.

Eventually, after discovering that Giovanni, too, saw him only as a tool, Mewtwo escaped, destroying Team Rocket's facility near Pallet Town and the metal suit that restricted his powers. Returning to New Island, he rebuilt the laboratory, and called on the best Trainers in the land to join him for a challenge, intending to clone their Pokémon and prove that the originals were no match. After seeing Ash's sacrifice to stop the fighting, though, Mewtwo changed his mind and sent the Trainers home, abandoning New Island once more. When it was last seen, only the Team Rocket trio that follows Ash around remained on the island, now completely covered in vegetation. 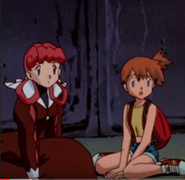