The Nurse Joy of Viridian City.

Viridian City was first seen at the end of Pokémon - I Choose You!, and is later visited in Pokémon Emergency!, when Ash Ketchum took his injured Pikachu to the Pokémon Center here. When entering the town, Ash was stopped by Viridian City's Officer Jenny, who found him suspicious, due to the fact he was carrying Pikachu in his arms and not a Poké Ball. While staying overnight at the Pokémon Center, Ash had his first encounter with the Team Rocket trio: Jessie, James, and Meowth. Ash and Pikachu foiled their plot to steal all the Pokémon in the Pokémon Center, thus beginning Team Rocket's obsession with capturing Ash's Pikachu.

Ash is in his second preliminary battle, on the Rock field. Both he and his opponent are down to their last Pokémon. Ash sends out Squirtle, while the opponent sends out Nidorino. Both put up a fierce fight, but Squirtle manages to win with a Skull Bash, allowing Ash to advance to the third round.

It is revealed that Gary was watching Ash's battle with his cheerleaders. He says that Ash is acting like he won the whole competition after winning "two easy matches". He then says, "He better enjoy all his celebratin' now, 'cause when his luck runs out, Ash Ketchum won't have anything to cheer about. Unless he wants to cheer for me, right girls? Hah!" His cheerleaders chant his name happily at this. While he is speaking, he seems jealous and a bit spiteful toward Ash.

Ash and his friends search for a Pokémon Center so Ash can heal his Pokémon before the third round. The centers are crowded and many Nurse Joys and Jennies are everywhere in the streets. Brock's love meter skyrockets at this rate. Team Rocket relishes this opportunity to swipe Ash's Pokémon and they do so by opening a fake Pokémon Center. After Team Rocket reveals their true identities to Ash and company, they are about to escape with Ash's stolen Pokémon, but Brock's Onix stops them and gives Ash his Pokémon back. After biting open a hole in the balloon, Onix sends Team Rocket blasting off again! After fending off Team Rocket, the group then hears that new Pokémon will be admitted into the Pokémon Center. Ash takes this opportunity to heal his Pokémon.

Ash is now in the middle of the third round match with Pete Pebbleman in the Ice Field. Both Trainers each won the first round of the match. Ash uses Kingler for the battle, while Pete uses Cloyster for the battle. Ash tells Kingler to use Crabhammer, while Pete orders Cloyster to use Withdraw. This doesn't look good for Ash since Cloyster used Withdraw. Kingler will get worn out from using Crabhammer, butMisty and Brock encourage Ash to keep going, because Cloyster is still losing health despite the defense boost. Kingler keeps hitting Cloyster with its Crabhammer until Cloyster's shell finally cracks,knocking it out. Pete recalls Cloyster and sends out Arcanine. Kingler tries a Bubble attack, but Pete's Arcanine dodges it and uses Dragon Rage. Kingler is defeated. Ash recalls Kingler and sends Pikachuinto the battlefield. Pikachu uses Agility, but Arcanine is trying to stop it with a Fire Blast. The Fire Blast attacks melt the field. Pikachu dives into the water, then uses Thunderbolt. Pete's Arcanine is defeated, and Ash is heading for the fourth round.

Sometime later, in The Battle of the Badge, Ash and his friends revisited Viridian City, and they find out the Pokémon Center that had exploded in the end of Pokémon Emergency! has been rebuilt. They found the Viridian Gym, and Ash decided to fight the Gym Leader, but Gary ended up fighting him first (forcing Ash to wait outside due to the one-Trainer-at-a-time policy that Viridian Gym apparently has). After Togepi was carried off by a Fearow, Ash and friends went looking for it, only to find it in the Gym. They then noticed that Gary and his girlfriends were badly injured due to Mewtwo's attacks. After Ash fought and won a difficult and dangerous battle with Team Rocket, the Gym collapsed due to Togepi blowing up the stands. Ash picked up the Earth Badge Team Rocket lost. Afterwards, Ash and his friends left.

After the Silver Conference, Viridian was once again revisited, in Gotta Catch Ya Later!, only some things had changed. Most notably, the Nurse Joy who worked at the Viridian Center in Pokémon Emergency! had retired and Misty's bike had been fixed. After a battle with Team Rocket, as well as a trio of hired thugs, they left Viridian City.

Ash later passed through Viridian on the way home in The Scheme Team, after the Ever Grande Conference. Visiting the site of the rebuilt Viridian Gym, circumstances ended up bringing him to the battlefield for a friendly one-on-one challenge with the temporary Gym Leader, Kanto Elite Four member Agatha. It is also here that Ash met up with Scott, the owner of the Battle Frontier and decided to take the Battle Frontier challenge. 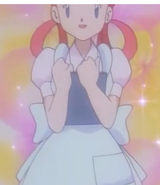